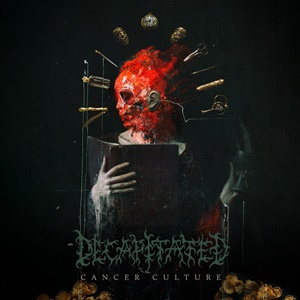 Polish band Decapitated have certainly had their share of trials and tribulations (literally) over their career. Car accidents that led to severe injuries and the death of drummer Vitek, plus arrests and deportation while on tour in 2017 following allegations of sexual assault – the charges dropped in early 2018 allowing the band to return home. Which brings us to Cancer Culture – the eighth studio album featuring the return of bassist Pawel Pasek after leaving in 2016 plus powerhouse drumming from James Stewart (ex-Vader). Venomous attitude plus relentless musical angst fuels these ten tracks, explosive as a cosmic force while injecting proper restraint in small spaces to ignite the next firestorm of riffs, blast beats, and caustic, paint peeling roars.

Following the expected militant march intro that is “From the Nothingness with Love”, the immediate riff/blasting mechanics of the title track take ahold of your cranium, slowly evolving into the shifting verses/chorus that feature mid-tempo bouncy groove, dazzling circular guitar runs and twists, plus the inhuman semi-growls and whispering voice that is Rasta. Rhythmic juxtaposing as a seesaw battle between vocals and music then shifts into these progressive, alluring dimensions as Jinjer’s Tatiana Shmayluk adds her infectious clean melodies for immediate standout “Hello Death” – delivering a death/groove metal masterclass where the Meshuggah-like sequences provide hypnotic swagger. Voivod-ish squeals and deadly speed again shift into low gear to eerie effect for the 77 second “Locked” – while the calmer to tremolo-infused / evil “Hours as Battlegrounds” takes the best of Sepultura and Behemoth on a crash course of hair windmill sequences. Brilliant leads, dynamic diversity from song to song, intense obliteration coupled with subtle melodies and grooves delivered in the right ways – Decapitated has not lost any momentum at least on the musical front through this material.

It’s probably an uphill climb for these musicians to move beyond some of the clickbait articles developed over the last few years. Those who have loved this band for a while and appreciate releases like Organic Hallucinosis and Anticult will revel in Cancer Culture – channeling a level of brutality and intensity rarely captured in the studio quite like this.