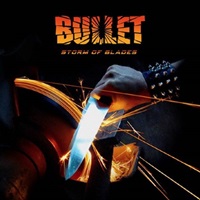 No matter what the given ‘in’ genre for heavy metal, there’s something to be said about the staying power of street level, classic riffs filled to the brim hook wise and melodically catchy enough to simulate instantly. Also peak at the new success revolution of old-timers like Accept and Judas Priest, and you can see how Swedish acts like Bullet stand to gain traction now more than at any time in their career. The quintet’s fifth album Storm of Blades is a fist to face affair, punching for glory right out of the gate and delivering 10 solid upper cuts (I exclude the 51 second “Uprising” intro set up) sure to connect all rebel rousers who miss that natural head banging sound made famous by AC/DC, Accept, Judas Priest and the NWOBHM movement.

Latest guitarist Alexander Lyrbo joins Bullet mainstay Hampus Hlang in developing numerous aurally pleasing chord combinations, even joining for some slow harmonic break action on “Hawk Eyes” and closer “Coming in Loud” to prove twin tandems need not flex their fingers at maximum intensity to create memorable album moments. One will never mistake Hell Hofer for the smooth, air raid siren power of say Dio or Dickinson, he would prefer the bark and bite of Bon Scott meets Udo Dirkschnider, sending chills in his upper barking scream nature on the higher energy “This One’s For You” while cruising along comfortably on the street credible “Riding High”.

Everything has its place on Storm of Blades, the occasional spotlight Gustav Hjortsjö drum fill, the pumping Adam Hector bass chugging along as a traditional metal foundation, the For Those About to Rock opening picking parts for “Tornado”, and songs that quickly get their point across and move along (over half the album’s cuts never reach the 4 minute mark). Bullet also know the importance of a beefy production, as many will enjoy the massive, bluesy guitar tones and impressive snare thump that careens the grooves into your brain like superglue.

Now moving into third generation transformation, all the genre blending in the world doesn’t matter when it comes to the basics of heavy metal 101. Plug in, rip out the right chords and choruses and you’ll find plenty of followers. Storm of Blades kicks and stomps because of the no nonsense attitude and affinity at heart, I expect plenty of numbers to make the future Bullet set lists (the Accept-like “Hammer Down” and guitar hero-ish “Run with the Haunted” are my picks to click) and hopefully help the Swedes make more of a North American impact as they continue to dominate European shores. 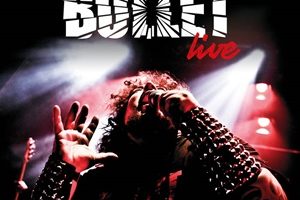 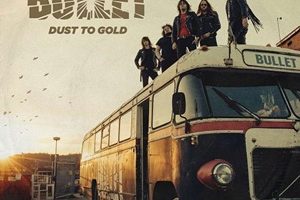