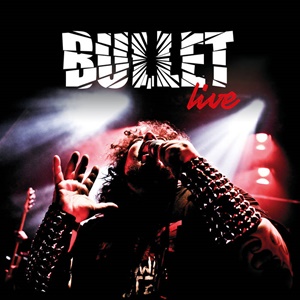 Live albums aren’t necessarily in vogue like the 70’s and 80’s for heavy metal – but there are artists still intent on marking their career with them. We all have our favorites (Iron Maiden – Live After Death and Judas Priest – Unleashed in the East here for this scribe), and now is the time for the Swedish unit Bullet to fire out their first live document after six studio albums / eighteen years of activity. Smartly recording multiple gigs from the 2017 Storm of Blades tour and 2018 Dust to Gold tour, the double record contains eighteen tracks and over 75 minutes of music – keeping the proceedings as real as it gets, so don’t expect any backing enhancement to mask deficiencies.

Twin guitar melodies galvanize “Riding High” to an early fan favorite, the band chanting along to the circular efforts of Alexander Lyrbo and Hampus Klang as the steady street-level rhythm section keeps things along Accept-oriented cruise control. Always a unique selling point for Bullet is the whiskey soaked gritty nature to the voice and delivery of Hell Hofer. Equal parts Brian Johnson and Udo Dirkschneider in terms of comparable singers, it’s hard not to admire his passionate pleas to “Turn It Up Loud” as the attendees enjoy other classic cuts that rear back to the early days such as “Heading for the Top” or “The Rebels Return”. The latest Dust to Gold record gains decent set list action, with five tracks appearing from “Speed and Attack” and “Fuel the Fire” plus the Sabbath / “Heaven and Hell” – like title track slamming home effective hooks for the legions in the audience. Bullet are one of those bands that aren’t going to be flashy and flamboyant regarding their live performance – these songs are made for beer-fueled headbanging, tossing back worries to another day and just screaming and shouting along to the walls of electricity blaring from the amplifiers and speakers.

Even an epic song like “Rolling Home” isn’t something overly progressive, sticking to a comfortable guitar/drum groove that bluesy hard rock/metal followers treasure – an ode to the road that traveling musicians can all relate to. By the time the ending “Bite the Bullet” closes out in dramatic, drawn out call and response fashion, the crowds leave satisfied and hopeful it won’t be long before another Bullet concert hits their hometown. Ideal for ardent fans of the band, and a decent primer for others wanting to get up to speed.