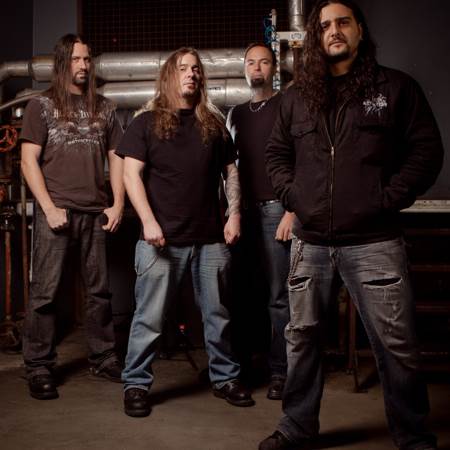 Montreal, Quebec, Canada-based extreme metallers KATAKLYSM have set“Waiting For The End To Come” as the title of their new album, tentatively due in late 2013/early 2014 via Nuclear Blast Records. The follow-up to 2010’s “Heaven’s Venom” will be recorded by KATAKLYSM guitarist Jean-François Dagenais, who has previously worked with MALEVOLENT CREATION, MISERY INDEX and DESPISED ICON, among others, and mixed by Chris “Zeuss” Harris (SUFFOCATION, HATEBREED, ARSIS).

Commented KATAKLYSM vocalist Maurizio Iacono: “Well, it’s been a seriously busy ride since our last album, ‘Heaven’s Venom’, was released over three years ago. From a successful world headlining run, to Ozzfest, into a recap of our 20 years as band with the ‘Iron Will’ DVD.

“We’ve been writing in a very humble fashion behind the scenes for the last six months.

“It’s time to take KATAKLYSM to higher levels and dig deep into our capacities as musicians and songwriters. We know exactly what we have to do; that’s why we have taken our time and why we’ll be taking most of the summer to complete the new album.

“The record will deal lyrically with mortality and the purpose of one’s being on this earth. The moment we are born, we start to die. It’s a sort of deal we make with life.”

KATAKLYSM‘s multidisc DVD, “The Iron Will: 20 Years Determined”, entered the German chart at position No. 98. The set depicts the ups and downs of KATAKLYSM‘s long, turbulent career, as well as footage of the band’s performance at last year’s Summer Breeze festival, which took place August 18-20, 2011 in Dinkelsbühl, Germany. The cover art for the release was created by artist Colin Marks (ORIGIN, EXODUS,NEVERMORE).

KATAKLYSM‘s latest album, “Heaven’s Venom”, sold around 2,400 copies in the United States in its first week of release. The CD landed at position No. 8 on the Top New Artist Albums (Heatseekers) chart, which lists the best-selling albums by new and developing artists, defined as those who have never appeared in the Top 100 of The Billboard 200.