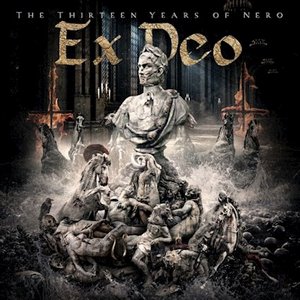 2017’s The Immortal Wars seemed to be a real turning point for Ex Deo. While their first two releases were solid, it didn’t have that epic scope and narrative that The Immortal Wars really captured. There was a more fitting, cinematic feel that truly took the band into more of an immersive Roman-themed effort. Now four years removed from that effort, The Thirteen Years of Nero ushers forth with another conceptual tale about the life of Emperor Nero and the band continues to raise the bar on their sound.

While there’s always going to be some linkage between Ex Deo and Kataklysm due to Maurizio Iacono’s readily identifiable voice and the guitar team from said act, The Thirteen Years of Nero continues to widen the gap between the two dominating forces by continuing to ramp up the cinematic elements. More so than any other Ex Deo release, the most immediate factor here is how successful the merger between the fast, bludgeoning death metal (and ample groove) and Roman-esque cinematic features is. Even a frenetic track like “The Head of the Snake,” for all of its glorious speed runs, imbues them with a symphonic power for maximum engagement. There’s also a greater sense of experimentation abound, including some excellent vocal interplay on “Boudicca (Queen of the Iceni),” which features Brittney Slayes, the eerie fiddle on “The Fiddle & The Fire,” and the epic piano-guitar combo that closes out the story with “The Revolt of Galba.” That said, cuts such as “Imperator” and “Brittannia: The 9th at Camulodonum” rain down plenty of metallic fury and groove to satisfy those seeking some throttling and aggressive material.

Ex Deo continues to evolve and find ways to make their sound as epic as the Roman Empire that they draw inspiration from. The Thirteen Years of Nero delivers an experience that captures both the brutality and beauty of the Roman Empire in metallic form.