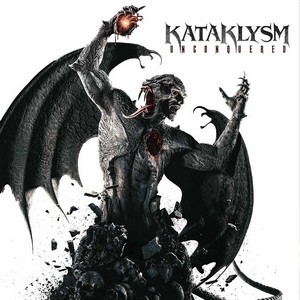 Ever the consistent ones when it comes to death metal, a fresh batch of Kataklysm at this point is all but certain to satiate the need for some heaviness combined with just enough melody. The band’s impressive fourteenth release doesn’t shirk away from the band’s usual combination of elements but somehow it’s quite compelling in its tone and it sure to catch some ears in just how damn heavy it sounds.

It’s immediately clear when the opener “The Killshot” fires into high gear that the band has really honed in on the production end of things. One can’t really recall when the band sounded this massive on a studio effort. Aided by a strong bottom end (something that will make them sound more ‘modern’ per say), the track launches in with venomous intention and sets the tone for the rest of the release. “Cut Me Down” then switches into some frenetic galloping riffs that are fueled by some really catchy melodies in the verse and the chorus goes all-in on that front with some catchy lines from Maurizio Iacono. Plenty of time to dig into those mid-paced grooves too, with “Focused to Destroy You” and “Stitches” standing high as some infectiously monolithic yet melodic tracks sure to get some heads moving. On the other hand, “Defiant” all but explodes with throttling energy and speed and will win over many with its visceral formula.

So yes, Kataklysm delivers on all of their usual fronts with Unconquered but true to the album’s name, there’s a reason why their formula works so well. The bolstered bottom end and production makes it really jump out at you while the band continues to deliver furious riffs and strong melodies/grooves. A touch of melancholy at the album’s end (“Icarus Falling”) is a welcome injection, but for the most part the death metal tank that is Kataklysm continues to roll onwards – triumphantly as ever.