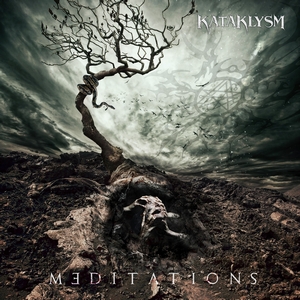 From their chaotic and dizzying beginnings to their melodic/heavy combo that has kept them going over the past decade or so, Kataklysm has remained a force within the extreme music scene. For their thirteenth effort, Meditations may continue to walk the same line that the band has been on, but they’ve tightened the ropes and really honed in on the contrasts and what makes it work, with the ears that being a veteran act allows.

One thing that some may pick up on immediately is the sound. Getting Jay Ruston to aid the band in mixing gives them a sound that feels a little more modern and melodic. Mind you, these are traits that Kataklysm has worked with consistently in the past, but it’s more pronounced on Meditations. More importantly, it works well with the band’s approach. A song like “In Limbic Resonance” can bring all the thunder that you would expect from the band, blastbeats and all, but the melodic leads and soloing help to make it feel more nuanced than previous releases. Particularly standout is the closer, “Achilles Heel,” with some of the most emotive sentiment the band has portrayed (don’t worry, it’s still driving hard with death metal ferocity). On the other hand, the sense of groove has not diminished either, with “The Last Breath I’ll Take is Yours” taking the initial prize for build-up and payoff in this regard, at the beginning of the track. Kataklysm continue to be masters of bringing in melodies without watering down the true-to-the-core death metal, as “Narcissist” and “What Doesn’t Break Doesn’t Heal” quickly show.

True to form, Kataklysm have lost none of their enthusiasm and passion for aggression with Meditations. While it continues to draw from similar sources, the highlighted melodies do their part to ensure that it feels quite fresh. An impressive piece for a band who’ve been at it for over 25 years now.