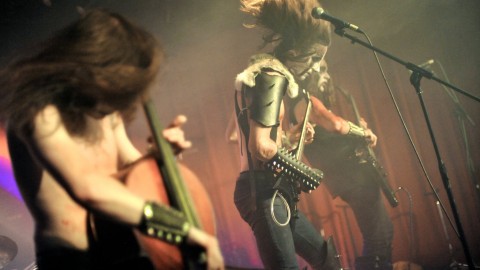 New York City-based iconoclastic black metal revolutionists, IMPERIAL TRIUMPHANT, will unveil the diseased fruits of their latest studio excursion in the form of Goliath. A traumatic two-track audio journey that’s at once cacophonous and beguiling, the nihilistic Goliath was forged in February at Menegroth the Thousand Caves, and engineered, mixed and mastered by Colin Marston (GORGUTS, KRALLICE, NADER SADEK, ATHEIST, ORIGIN) and IMPERIAL TRIUMPHANT.

A press release describes the EP: “Goliath centers itself around the biblical accounts of Sodom and Gomorrah. The cities, synonymous with unrepentant sin, were consumed by fire and brimstone under the manifestation of God’s wrath on the Day of Judgment. Goliath serves as the soundtrack to the slaughter – a searing barrage of twisted DEATHSPELL OMEGIAN riffing, angular pace shifts and feral vocal cascades encased in an atmosphere of true, unabridged torment and the pervading stench of broken souls.”

Elaborates the band, Goliath is a hallucinatory journey through the psychedelic hellscape that is Sodom and Gomorrah.”