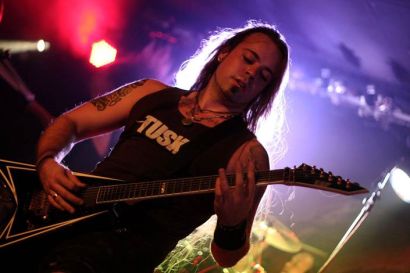 The band states: “After the departure of Sandra and Andi we have started to look for musicians, to start the next chapter with us and also the upcoming concerts. At this point we want to thank everyone, for sending us applications – some of them were really good. As of today we can announce that Dom (Dom R. Crey), also known through Nothgard and Wolfchant, will be joining in on guitars from now on. We are absolutely proud that we have won our, partly long-term, friend as the latest member of the family! We are totally looking forward to the future with him as part of Equilibrium!”

Dom adds: “I am looking forward to the upcoming concerts and the next time, but also to listen to the new masterpiece of the Equi-guys. René has overdone himself with it, in my own opinion, which makes me even more euphoric towards the next gigs. This new and for some rather unusual constellation has no effect on my other bands. I am looking forward to hav all the fun in the world with Equilibrium, that have been friends of mine for a while now and also to share this fun with you, dear Equi-Fans.”

The band’s new Erdentempel album is due in July.