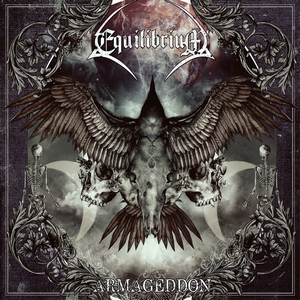 Getting a reputation as a band can begin to have some consequences when you start to fight against it or seek change. The usually cheery (by metal standards) Equilibrium have been dancing through four records at this point, often moving into somewhat goofy and jig-inducing material that usually swings to the epic side of things. So what happens when they decide to increase the darkness level in their music?

Perhaps to give people a solid heads-up, the first single released from Armageddon was that of “Prey.” Arguably the most sinister the band has sounded, it took this writer up to the chorus to finally believe it was the same band and not a unreleased Kataklysm track, with its thick, mid-tempo groove. While other tracks do try to bring a darker/heavier approach to Equilibrium, most still have a good dosage of synths in the background to bring a more breezy approach by the song’s chorus (see “Katharsis” and “Eternal Destination”). This heavier side of the band does balance well with what they’ve done, and allows them to show a bit more depth than some might have previously given them credit for. The bread and butter of Equilibrium is still quite present, with “Zum Horizont” and “Helden” providing the bouncy and jolly feelings that tend to bring a smile to some of the most hardened of faces. The band tries their hand at more English lyrics as well (there are 4 in total), no doubt a response to their growing international fanbase, with “Born to Be Epic” and “Rise Again” sure to do well for the band on the live front. As opposed to the heavier sound, an experimental track that does a 180 is that of “Koyaaniskatsi,” which uses only some spoken word atop a very upbeat sound, which can only be described as the type of thing you’d hear at the end of a movie after the protagonist triumphs over their foe.

While many are quick to dismiss Equilibrium post-Sagas, Erdentempel and now Armageddon show that the band has been willing to show some growth and are comfortable in expanding their sound into new directions. Most importantly, these expanses don’t come at the band forgetting where they came from. Armageddon may be heavier than previous works, but somehow it still comes across as just as jovial and fun.