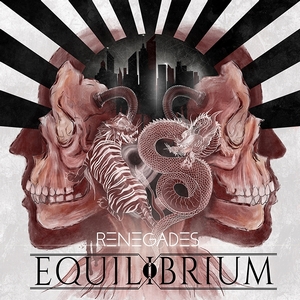 Granted those reading probably fall into the ‘grin on your face’ category, as Equilibrium’s music has been in that direction from the start. That said, it may take some adjusting for long-time fans when it comes to Renegades. There is movement further away from more traditional folk (something that has been evidenced by their more recent output) but the music keeps that bombastic, over-the-top epic quality that the band has cultivated their status on, despite the modern tonal shift. The most obvious change involves the introduction of clean vocals on a number of the songs (which, as some may notice, have more English lyrics than ever before). However, as first evidenced in “Tornado,” they fit the music quite well. Triumphant and epic in and of themselves, they add another dimension to tracks like “Moonlight,” which push the band further into modern metal territory. The real envelope-pushing moment will be the guest rap vocals on “Path of Destiny,” but truth be told, it’s a short blip and actually meshes well with the song itself.

All of that aside, Renegades does keep that balance of darkness and jovial bounce within the Equilibrium sound. “Himmel Und Feuer” is a quintessential Equilibrium track – big, happy synths sharing the beat with thundering riffs and Robse’s throaty growls in a manner that makes you want to raise a glass and cheerfully move around a bit. “Hype Train” and “Kawakaari – The Periphery of the Mind” also champion this territory, while other songs like “Final Tear” and the title track capture that heavier edge that the band has worked in alongside the catchy synths well. Of course, the album finishes with its longest track, though this time only at 7-minutes in the still captivating and epic “Rise of the Phoenix.”

Despite going through plenty of changes over the years, both in members and stylistic tone, Equilibrium still manages to keep a surprising consistency. Renegades may cause them to lose a few of the die-hards, but if you stick with it, beneath it all is the same upbeat and epic Equilibrium that is sure to brighten some metal fan’s day. The band is still straight-up fun.