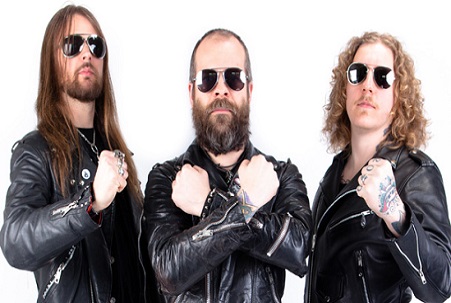 The catalog of Grand Magus has grown as such to where full-on discussion regarding the band’s albums (seven in all) should be wide-ranging, especially if we want to get all nitty-gritty with the earth-moving, vintage of metal riffs of JB Christoffersson and the air-tight rhythm section, the proper definition of “power trio.” The blended element of Christoffersson’s vocals is the ultimate cap to GM’s pure, vintage, but not dated sound, and with the band’s new Triumph and Power fresh in the ‘ole brain, we felt it was nigh time to rank a totally-biased top-5 list of the band’s songs, and include Christoffersson’s throughts. Without further rambling, here they are:

1. Fear is the Key (from Iron Will)
DR: Drum roll, then all-out rocking, verse shuffling along, with JB belting about the ills of organized religion. The big-time chorus fills out what is the band’s most immediate number. One of the best pure metal songs in the last two decades. Book it.

Christoffersson: That song started with the main riff which was something that I always played when we were writing songs for Iron Will. It was almost like a joke riff and we always started playing like maniacs together, laughing because it was so catchy in a funny way. We never went any further than the riff though, but since I always brought it up, usually in the end of our jamming sessions, we felt that we should do a proper song out of it. I think it turned out really well and I always get a good feeling when I hear it.

Christoffersson: I don’t think it gets more heavy metal than that. It’s obviously very inspired by Judas Priest, one of our favourite bands. The chorus was a tough one to figure out, it’s quite unconventional compared to the rest of the song, but that’s probably why it works.

3. Valhalla Rising (from The Hunt)
DR: Call-to-arms (see chants at the beginning), easy riffing (so simple but effective), while JB’s vocals riff with passion and depth. The band would follow suit with similar-styled songs on Triumph and Power, but this one takes it for 2012’s The Hunt.

Christoffersson: The Hunt was a difficult album to make and it had an unusual (for us) hard rock feel in certain ways. The album was very much a reaction to Hammer of the North which was very compact and almost dense in its metalness. But “Valhalla Rising” was a song in that vein, I wanted to make something really metal, heavy and with a strong chorus. In some ways it pointed forward to Triumph and Power, I think.

4. Silver Into Steel (from Iron Will)
DR: Love those lush opening acoustics, but really, it’s the momentous verse (which starts around the 0:46 mark) that gives the song its throttle. Vocal effects stir up the aforementioned verse, yet the chorus carries the jam to new, stirring heights.

Christoffersson: One of the few songs back then that actually started with the melody rather than the riffs. I had this melody for the verse and the chorus and the rest just wrote itself. It’s funny, but when we did that track, we were worried that it was too melodic and “soft” since the vocals are not in a high pitch for the verses, so we put a lot of distortion on the lead vocals to make it sound more ferocious. It turned out really well, but I don’t think we should have worried, because it’s one of our most liked tracks I think. It’s not too soft in any way, haha.

5. Repay in Kind (from Wolf’s Return)
DR: The odd choice in the bunch, “Repay in Kind” works with the band’s Scandinavian roots for a song that doesn’t ride along in traditional GM fashion, but instead, works in a tempo jolt that if the band ever got around to playing it live, would be a winner.

Christoffersson: Interesting choice. Yeah it’s a cool track that we’ve never played live. It’s got a black/death metal influence for sure and is probably one of the faster songs we’ve done. I’m very pleased with the chorus part which are pretty unusual for us.