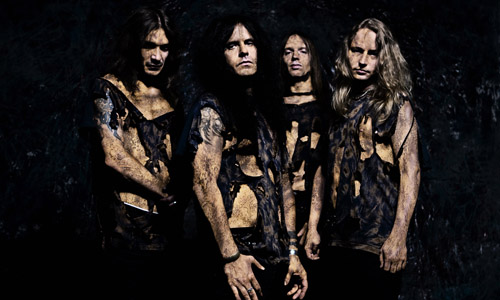 Leave it up to Kreator to come up with a scathing, unrelenting assessment of the world that we live in. The German thrash icons have never been ones to mince words and on their latest Hordes of Chaos, the vitriol is there and then some. The fast-paced and frenetic 10-song offering is easily Kreator’s most speed metal-oriented album since 1990’s Coma of Souls and is sure to lay some people out in the live setting.

The band’s output this decade has been practically flawless. Since lead guitarist Sami Yli Sirnio joined the ranks in 2001, Kreator (also comprising of vocalist/guitarist/mainman Mille Petrozza, longtime drummer Ventor, and bassist Christian Giesler) has enjoyed a rebirth or renewal of epic proportions. Both 2001’s Violent Revolution and 2005’s Enemy of God are far away and away the best Euro-thrash has to offer and are so good, that the band was able to tour for years at a time without the need for a quick follow-up.

For those who have followed Kreator’s journey from young thrash upstarts in the late 80’s, to reveling in the modern metal era in the 90’s, you know Petrozza and co. will deliver. Hordes of Chaos does indeed deliver the goods, so being the opportunistic people we are, Blistering figured it was a good time to chat with the talkative and upbeat Petrozza about the new album, old age, and those darned new thrash metal kids…

Blistering.com: At this point in your career, how much of a priority are studio albums given you do one every four years?

Mille Petrozza: Of course they are. It gets boring playing the old songs on tour and when you do a new album, it’s a new challenge. We want to put out high quality albums, especially after Enemy of God and we didn’t want to put out something that was mediocre or was not as strong, so rather than put something out that wasn’t quite there, we kept touring. In between, I wrote some of the songs and collected ideas in the beginning of 2008 and seven months later, we went into the studio.

Blistering.com: Does any writing take place while on tour?

Petrozza: Never, never. It’s always in-between [touring] when I get inspired. The thing is, I’m not the kind of person that can sit down and play guitar on a tour bus. I’d rather my time when I’m at home and relaxed and don’t have anything to think about other than playing or writing. I’ve tried – I’ve heard from a lot of bands that they write on tour and I tried it as well, but it didn’t work.

Blistering.com: Hordes of Chaos is a lot speedier and aggressive thanEnemy of God. What was your approach heading into this album?

Petrozza: We wrote the album for a live situation. All of the songs on this record are made to be played live. That’s the whole formula, if there is one, for this record. Basically, when we came together for rehearsals, we knew that these songs are the ones we’re going to have to live with for the next couple of years. We also know our fans expect something intense and brutal, especially after this long wait. We were totally aware of that and we wrote the album like it was a set list. Everything about the album is four musicians playing the album for themselves and for their fans.

Blistering.com: Vocally and lyrically, you sound more pissed off than ever, and I’ll point to “Amok Run” as a testament to that. Considering all that is going on in the world right now, what was on your mind?

Petrozza: All kinds of things. The title track is a “state of the world” kind of thing. It’s almost become a tradition over the last couple of years where the album titles talked about how we feel at this point in time. This is the same thing. The title track, “Hordes of Chaos” is talking about how things have been happening in the world. The main theme of the song is “Everyone against everyone” and I think that sums it up. I believe that after the catastrophe of 9/11, the world has fallen into chaos. A lot of control is being forced upon us by the government and as a reaction to that, the war on the streets has gotten more brutal. It’s total chaos. All of these wars started all over the world haven’t helped either, so I think that sums it up.

Other than that, there’s not only political stuff, stuff like “Amok Run” is perfect connection between music and lyrics. I tried to put myself in the situation of this guy running amok somewhere in the US. This kid put an announcement on YouTube and you can still see it. He’s talking about how he’s going to kill everybody and himself and how teachers and other people have made him do it. The song has quotes from that. I really took my time to make everything fit because there’s nothing worse than great music with words that don’t make sense.

Blistering.com: You’ve always been on top things, even with the last album with “Suicide Terrorist” and “Impossible Brutality.”

Petrozza: If you live in the world, you should look at it; take a look at what’s happening and not turn your back. You can’t pretend everything is great. There are still a lot of things that do piss me off. I’m not saying that I’m a pessimist or I hate the world. I like being alive, but there’s still a lot of things I think are wrong and lot of things I disagree with. I have my music and my lyrics to speak my mind to deal

with these things in a very creative way. I can turn this negative energy into positive and maybe get other people to grasp a certain idea. The real horror is a lot worse than the Hollywood monsters can think of. Like what the human mind, war, or the government can do to people. That is the real horror.

Blistering.com: Switching gears, is this the strongest Kreator lineup? You had some pretty strong ones in the late 80’s, but this lineup has been together since 2001 and seems to be firing on all cylinders.

Petrozza: Yes, absolutely! Sami, when we write songs, we do it as a three-piece. After I come up with the songs and melodies, but when Sami comes into the picture, he gives the whole thing another dimension, another quality. And he’s definitely important to the band. He’s become almost like a trademark. We have such aggressive riffs and brutal songs, but he brings it back into something…he always just plays nice melodies [laughs]. Cool licks and he comes up with great songs.

Blistering.com: How do you think he stacks up against [former guitarist] Frank [Gosdzik]?

Petrozza: Frank was good for the time of Coma of Souls when we had to find our style. Now that we have our style, somebody like Sami, you can’t really compare them. I think Sami has this unique style and Frank had to find his style with us. Different times, two different versions of the band, really. I think the lineup for Coma of Souls was a strong lineup, but it was the 80’s and beginning of  the 90’s and nowadays, there are different quality standards.