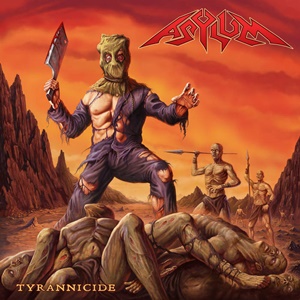 Active since 2012, Australian trio Asylum assault the senses with their primal brand of chunky, riff-oriented thrash. Previously releasing two studio EP’s Slaughterhouse in 2013 and Concealed Death in 2016 plus a Live in Melbourne EP last year, the time has come to finally issue a full-length for Tyrannicide. These lads waste no time getting down to business – the nine tracks foregoing any excessive sound samples or studio tricks, instead putting the pedal to the medal through gallop-oriented rhythms, rapid-fire gritty melodies, effective solos, and undeniable hooks that traverse influences from the Bay Area scene as easily as mainland Europe.

Machine gun down picking appears to be a staple from guitarists Rob Armstrong and Shane Robins – where acts like Dark Angel and Kreator come to mind for headbanging highlights such as “Eternal Violence” and the title track. The power of the music as well as smartly executed transitions or tempo fluctuations that present those key half-time ‘pit hungry’ movements ensure Asylum don’t miss the mark when it comes to their conviction for this genre. Drummer Levi Damiris has solid chops plus natural ability to switch from straight forward thrash beats to faster, extreme angles or pounding groove-oriented parts – often within the same song, as you’ll hear on “Cruelty Obsessed”. The battering ram principles extend to Shane’s vocals – raspy yet discernible in a mix of Tom from Sodom meets Mille of Kreator way, sending shivers to the sky for “World Asunder”. While the artwork probably tends to align in the cliché department with the masked butcher standing over his carnage, the proper focus on all the musical fronts including a crispy, punchy production will win over more converts that believe an independent, DIY act can throw down just as well as the major groups in this genre.

Clocking in at a very economical thirty-eight minutes and change, Tyrannicide meets all the requirements for a blood-infested, energetic blitzkrieg of a record that all thrash maniacs desire. And for Asylum, that should mean more accolades, increasing followers, and possibly stronger contacts to move up the ranks.