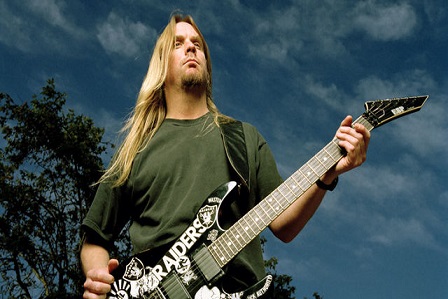 The unfortunate passing of Slayer guitarist Jeff Hanneman gives pause to the man’s important contributions to thrash. Considered to be the most shy and reserved member of Slayer, Hanneman didn’t crave the media attention like Kerry King, nor did have the propensity to take part in numerous projects ala Dave Lombardo. Hanneman only concerned himself with Slayer, and in the process, wrote some of the band’s most defining songs. The obvious choices are overwhelming: “Angel of Death,” “Raining Blood,” “South of Heaven,” “War Ensemble,” “Dead Skin Mask,” and “Seasons in the Abyss.” Suffice it to say, no Slayer live set was complete without this grouping, but (and this one arbitrary “but”), Hanneman’s real prowess shined on Slayer’s more unheralded, but no-less-important songs.

Because doing a list with the “hits” would be a little too predictable, let’s climb into the Slayer vaults and tag five songs the blonde-bomber was responsible for that are indicative of just how strong a songwriter he was. May he rest in peace.

1. “Postmortem” (Reign in Blood, 1986) The setup song to “Raining Blood,” “Postmortem” is Reign in Blood’s vicious mid-tempo grinder. King and Hanneman create a down-picking maelstrom, giving the album a perfectly-timed break in the all-out thrash action. As is the case with the rest of the songs on the album, the merciless tempo is ushered in at the song’s back-half.

2. “Blood Red” (Seasons in the Abyss, 1990) “Blood Red” happens to be the shortest cut on Seasons, but don’t mistake it for a Rain in Blood wannabe. Instead, the song attains foothold via a treacherous opening riff, then hits with a ready-for-headbanging verse. The solo trade-off between Hanneman and King is gold, too.

3. “Read Between the Lies” (South of Heaven, 1988) Aided by what is perhaps Tom Araya’s all-time best vocal performance (love those lyrics, too), “Read Between the Lies” is a proper summation of South of Heaven, not to mention its most momentous track in an otherwise toned-down incarnation of the band’s sound. Hanneman’s slithery melodies and harmonic bend are unmatched here.

4. “Spirit in Black” (Seasons in the Abyss, 1990) Like South of Heaven, the songs on Seasons became more digestible, albeit no less incendiary. “Spirit in Black” is proof of this, with the first half honing in a chorus that is a direct shot, while the second portion (like “Postmortem” and “At Dawn They Sleep”) is blazing speed starting at the 2:14 mark. Totally unrelenting.

5. “213” (Divine Intervention, 1994) Named after Jeffrey Dahmer’s apartment number, “213” was one of Hanneman’s few contributions to the King-dominated Divine Intervention album. However, the song gels with Araya’s fascination with serial killers, not to mention its emergence as one of the guitarist’s most ominous tracks alongside “Dead Skin Mask.”