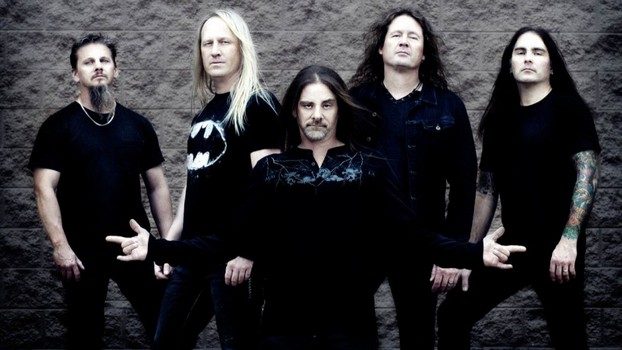 Second chances in any aspect of life should never be taken for granted- especially in the realm of metal. Many musicians falter due to band dissension or poor decision making at certain key moments that take a promising career into one that years later has a ‘what could have been’ outlook. For veteran thrash outfit Flotsam & Jetsam, they are determined to remind all takers that they can still unleash powerful songs and bring their all live. Issuing their latest self-titled release earlier this year, the current lineup of vocalist Eric AK, guitarists Michael Gilbert and Steve Conley, plus bassist Michael Spencer and drummer Jason Bittner developed a product that encompasses the energy and spirit of the 1980’s while not forsaking the groove/hook aspects that have broadened their style during the 1990’s and beyond.

Sitting down with bassist Michael Spencer before their Poughkeepsie, NY headlining show while on tour with Helstar and Hatchet, you can tell in this conversation that gratitude and making up for lost time are priorities for this musician. We delve into how he made his way back to Flotsam & Jetsam after his first venture during the original No Place for Disgrace recordings, a boatload of tour stories including a scary encounter at a Belgian gas station with the local Arab community, as well as honest outlooks on the changing landscape of the metal scene and personal social media use. It was a pleasure to catch up with Michael, who this journalist talked to 15 years previous for an in-depth feature about Sentinel Beast for issue 9 of Snakepit magazine.

Dead Rhetoric: Growing up with your father in the Air Force and traveling the world due to his lifestyle, how did this shape your view of the world and your personality- and did music become an important outlet and form of expressiveness?

Michael Spencer: Music, I would credit that to my parents who got divorced when I was 14. The Air Force brat aspect of traveling sort of developed a short-term relationship thing for me. So being on the road, the types of jobs I would get included being an air conditioning service technician, you would be at a person’s house for a few hours and then you are gone. I’m not the type of person that can sit on a job for months at a time. So when you are on the road, you go to a venue, you meet people, talk to them, get the connection but not the deep thing. Being in the Air Force, you make best friends quick and you lose them as quickly- you end up putting up walls in that regard. You work through that as an adult to make it work as a positive rather than a negative in your life.

Dead Rhetoric: Did you feel any sort of culture shock with all the different places that you traveled to?

Spencer: No, because it was natural to me. Being in England, being in Crete, and then Germany by the time I was 9 years old, that was normal. From 10 to 13 I was in Japan, and that was my favorite place to be. Being a young kid and understanding art, culture, all the cool GI Joe’s they had- what a cool place to be.

Dead Rhetoric: What circumstances took place for you to rejoin Flotsam & Jetsam, and how thankful are you to get a second chance considering what was left on the table when you were writing and working on the recording for No Place For Disgrace?

Spencer: (Drummer) Kelly (Smith) and I reconnected in 2009, on a friendship basis and talked about me leaving the band, or me being asked to leave the band. A lot of it had to do with the manager the band had at the time, he had too much influence on the band. He had no problem of poisoning them against me, because I wasn’t on his team. He happened to be a guy who had worked with (Jason) Newsted, and the opinion was if he was good enough for Jason, he’s good enough for us. He was writing lyrics with the band, and had a little too much say- and me coming from a band like Sentinel Beast, where I was the main guy of the band, I looked around to the other members and said ‘hey, us five guys can do this’. I’m not on the sixth member’s side, so of course he was more than willing to help push me out. But I am a team player. Kelly apologized and said that guy actually damaged us in the long run, personality-wise and as a manipulative kind of character. This was sort of before Kelly re-joined the band, he rejoined in 2012 but he and I had been conversing, going to baseball games in Arizona. So, when he was in the band, he reached out to me after they recorded Ugly Noise -he said Jason Ward doesn’t want to tour anymore, do you want to be back in the band?

I own my own business, and have since 2004- so I was a little leery about being away from my business for more than 3 weeks at a time. Of course, the very first tour that we end up doing is with Sepultura, and that’s a five-week tour! But it was Europe, and I love traveling in Europe, so let’s make it work. I did pretty good, I don’t think I lost any clients because of that. My employees took care of things at home. Re-recording the album was a cool thing for me because that was this weird 27-year delayed gratification about I should have recorded this back then because they recorded it six weeks after I left the band. Let alone some of the songs that would have been on there that I kept, which ended up being on the new release like “Forbidden Territories” and “L.O.T.D.” were songs that would have been on No Place for Disgrace had I stayed in the band. The two albums that we’ve done- the re-recording with slightly better production, more powerful tempos even though we still had some of the speed. That was cool to me, it’s propelling the band to what they are now.

Dead Rhetoric: I remember watching some bootleg videos in those tours where you were performing “Forbidden Territories” live- so it must have been bittersweet to finally get this on an official album…

Spencer: Yes it was cool. Like I said, better production- certain low notes that wouldn’t have been on that album (that) are actually present with the way things are mixed. If it had the mix of 1988, it wouldn’t have the power. To me, the original No Place for Disgrace was not a bass friendly album. There was no real presence of the bass guitar- I don’t know whether that was because Troy (Gregory) was just coming into the band, but that to me is not the vision of what the band should have been. I want to make sure every instrument has some presence, the bass guitar should be in the mix. Respect every instrument and their roles in a band and not bury it like an And Justice For All kind of thing. It doesn’t help the band aspect.