Exodus – Tempo of the Thrashed 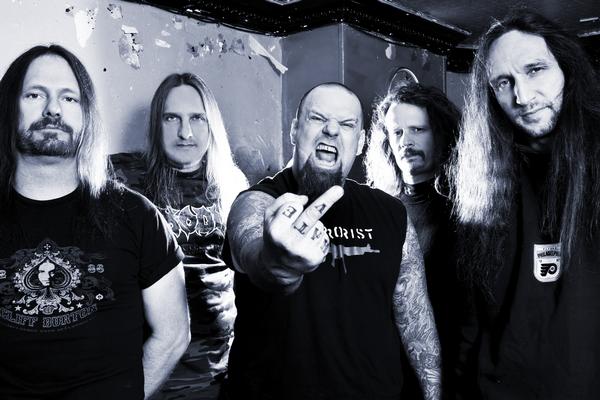 Continuing the trend of bands re-recording classic albums and/or songs, Bay Area thrashers Exodus are taking on the mammoth risk of updating their pivotal Bonded By Blood album from 1984. Let There Be Blood was created in order to pay tribute to original singer Paul Baloff who passed away in 2002 due to a brain aneurysm and to showcase the staying power of a collection of songs that are the foundation of thrash. Exodus appears to have done the original version justice, adding an extra blend of bite and vitriol courtesy of new throat Rob Dukes, along with modern production methods courtesy of Andy Sneap. Now consisting of Dukes along with guitarist Gary Holt, lead guitarist Lee Atlus, longtime bassist Jack Gibson and original drummer Tom Hunting, Exodus appears to relish its role as thrash underdogs and have rode the crest of the scene’s resurgence back to the top.

The man steering the Exodus ship is Holt. Now a thrash metal sage of sorts, Holt has guided Exodus through major label tumult, Baloff’s untimely passing, and former singer Steve “Zetro” Souza’s well-publicized flake-out on the band in 2004. Through it all, Holt has kept both his focus and sense of humor in tact, and when combined with his unmatched riff and rhythm skills, what you have is one of the last real vanguards of the Bay Area thrash scene. Better yet, Holt’s writing output in the three post-reformation albums: 2004’s Tempo of the Damned, 2005’s Shovelheaded Kill Machine and last year’s The Atrocity Exhibition: Exhibit A fall right in line with the early efforts like 1987’s Pleasure of the Flesh and 1989’s Fabulous Disaster.

With the release of Let There Be Blood right around the corner, Blistering figured it was a good time to catch up with Holt and discuss his memories of Baloff, the upcoming second installment of the Atrocity Exhibition, playing in front of 20 people in Colorado, and for fun, a little “Rate that Exodus song.”

Blistering.com: Did the re-recording of Bonded By Blood rekindle a lot of old memories of Paul?

Gary Holt: Yeah, sure. Anytime we’re recording anything, I tend to use Paul as my barometer to see if it’s heavy enough. Whether we’re working on Atrocity or Shovelheaded, I always think what Paul would think. When we’re doing drum tracks, Tom and I were laughing the whole time because we were remembering the total mayhem that it was when we were recording the album. We did the album at this studio [called] Prairie Sun which is on a farm north of San Francisco. We stayed in these cabins and went insane. It was amazing we got any work done [laughs]. Our friends came up from the Bay Area and they’d get drunk, get in fist-fights, and shit would get broken, but somehow we managed to make a classic.

Blistering.com: Any regrets on not doing a reunion album with Paul?

Holt: We had every intention of doing one, but before Paul passed away, all of us except for Jack were a drug-addicted mess. We couldn’t pull it together. We’d get high and get in a jam for a while. We’d have this room full of beer and guitars and we’d just hardly ever played. It took getting clean to get serious about [it], but unfortunately, Paul’s death and then some for me to finally wake up. When we did the (2001) Thrash of the Titans thing, we rehearsed for two weeks and in the course of those two weeks, we played the whole set once. We’d show up for practice, play a couple of songs, stop, play another song, then have problems with a circuit breaker, so we went through each song at least once before we played the show. It’s just hard when you’re having that kind of problems trying to get serious and it’s one of my great regrets to not do a studio album.

Blistering.com: How do you think Paul would do on some of the new stuff?

Holt: I think Paul could do it and do it well, but the real problem with Paul is that he had some timing issues. Paul was one of those great characters and one of those few guys where it didn’t seem to matter much if he was off-time because it was what he was doing on stage that made him so great.

Blistering.com: Any temptation to go back and do what Testament did and do a compilation?

Holt: The only other stuff I would possibly want to re-record is Pleasures of the Flesh. It’s a great album but it was marred with by production difficulties. The change over on the producer from Mark Whitaker (former Exodus manager) and he wanted things done a certain way and it created some big problems, so we had to make the change in the middle of the album. A lot of the recording sessions for the album were spent repairing things instead of perfecting.

Blistering.com: While on the subject, do you have the alternate album cover for Pleasures?

Holt: I don’t have the actual artwork, but I saw it a couple years ago. We went down to LA and visited the artist who did it and I held it in my hand. It was one of those situations where the label didn’t want to use it because they were worried some of the mainstream stores wouldn’t carry it, but they proudly proclaimed the original “banned” artwork on the picture disc. Banned by you, not by anyone else – they were trying to make it sound like the moral majority banned [it], not the label. It’s a silly cover anyway. At least it’s not some nun fucking a crucifix.

Blistering.com: Rob has been in the band for a few years, so what is his role now?

Holt: I learned that for better or worse, it’s just to take the reigns of him. He’s so in character live and what you see there is not a character and sometimes when he opens his mouth, he’ll say things that will make me wince. Now, I give him a lot more free-reign to put his foot in his mouth and that’s all a part of him being the frontman he is. He’s just insane and one of the best in the world in my opinion. He’s earned the right to not have anyone policing what he does. He makes me look like the smartest man in the world [laughs]. He wanted the job, had no experience, but I gave him a shot and I give him all the credit for making me look like I made this “great find,” but it’s all on him.