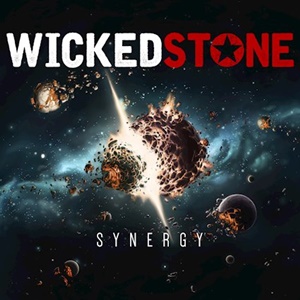 The parallel development of music in the US and UK markets is intriguing – oceans apart but often similar in the sense of continually morphing and exploring new trends/sounds hoping for that ‘next big thing’. At times it’s just a relief to hear musicians plug in and play – bringing us to Wicked Stone. Forming in 2015, they’ve released a debut album and EP during the last six years – becoming a wanted act on the UK gig and festival circuit – playing Hard Rock Hell and opening for Steve Harris’ British Lion as highlights. Synergy is the band’s second full-length, generating a sound that straddles melodic hard rock and metal, putting the proper focus on catchy hooks, harmonies, and choruses song to song.

The combination of sneering, attitude-filled vocals full of potency, crunchy guitars with a little modern edge, plus heads down rhythm section work to drive home the grooves and tempos in that fist pumping, toe-tapping way is the gameplan for the five-piece. Aspects from Alter Bridge to Black Label Society come in against some European metal finesse and melodic sensibilities – guitarists Joe Davies and Dave Austin laying down thoughtful riffs and smoldering leads, plus occasional twin harmony accents in a bluesy way. “Reclaim the Crown” for instance opens with some vicious semi-staccato activities before relenting in a more mid-tempo to slightly doomier atmosphere, opening up the upper register note abilities of vocalist Joe Hawx. Often picking a strong riff to start to branch off with supplementary tempo shifts and driving transitions seems a critical part of Wicked Stone reaching out and grabbing the people immediately – making “Hunted” and “Say Goodbye to Yesterday” standouts. Another dynamic selling point takes place during “Now You’re Gone” – a poignant ballad that starts with serene melodies and acoustics before the passionate high register action and stomping, heavier instrumental parts kick in.

Wicked Stone possess all the proper mechanics, performance abilities, and adequate knowledge when it comes to songwriting to be a future staple in the international melodic hard rock/metal landscape. Synergy should be a prime table setter for a burgeoning career.