Thursday, 9th May 2013 By Kenneth Gallant 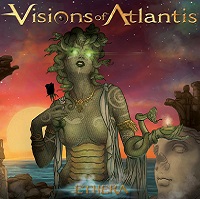 I’ve said this on countless occasions, but there is a glut of symphonic/power metal bands overcrowding the genre with tons of mediocrity. Fortunately, one such act has been boldly steering the ship away from that staleness and charting off into more adventurous musical territories.  I am talking about Visions of Atlantis, and ever since the release of 2011’s Delta, the band has begun a new love affair with modern rock influences. There seems to be less and less symphonic/power metal trappings in their music and the band is all the better for it.

Ethera marks album number five for these Austrian stalwarts and this release is way more radio-friendly than previous efforts. Singers Mario Plank and Maxi Nil play off each other with a delicate sense of balance and understand the importance of sharing melodies and harmonies. Both vocalists stick to their parts without fighting for dominance over the other and a good example of this can be found on a track like “Vicious Circle.” Plank begins the track with tender vocals and is backed by piano, while Nil joins in halfway and helps to kick the chorus into high gear. The number is very effective, but much of this dynamic plays out on the entire album.

A track like “Tlaluc’s Grace” is catchy and the hard rock chorus really drives the song. The same can be said on “Burden of Divini” and on “Hypnotized” drummer Thomas Caser is the true force behind the kit. Other noticeable moments on Ethera can be found with the chunky and chugging guitars of Chris Tan who excels on tracks like “The Ark” and “Clerics Emotion.” His guitar solos help build the songs, allowing for a tremendous range of tone and atmosphere. The style change brings this band much closer to groups like Delain and Lacuna Coil and for some fans this might be hard to digest.

I don’t mind the change since the radio-friendly metal sounds allows for Visions of Atlantis to be more distinct in their approach. All the music on Ethera is balanced to perfection, and the band is headed into the right direction, as they distance themselves from the stagnant symphonic/power metal sounds of the past. This is a worthy release and if you enjoy female fronted vocals, this just might be for you.