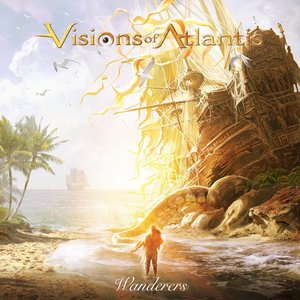 It doesn’t seem like Visions of Atlantis ever can catch a break. Going through many line-up changes over the years, the band’s most recent departure is that of male vocalist Siegfried Samer, though the rest of last year’s The Deep and The Dark members do remain intact. Considering the quick turn-around, Wanderers shows that the band hasn’t lost any steps with new vocalist Michele Guaitoli.

Everything that Visions of Atlantis has been working with up until now (and particularly on The Deep and The Dark) is present here on Wanderers. The emphasis on the shared duties of both vocalists, the theatrical symphonic elements that have just the right adventurous spirit, and the potent guitar riffs and strong solos. There’s a real feeling of being spirited away on a quest when the band kicks it into high gear, such on the boisterous “A Journey to Remember” and soaring/triumphant closer “At the End of the World.” One noticeable uptick here is the quieter side of the band, with three tracks that are on the mellow side – it could be considered a drag for some, but Clémentine Delauney has one of the most captivating vocals of this particular genre at the moment, which makes “Into the Light” and the title track blissful occurrences, and the duet with Guaitoli on “Nothing Lasts Forever” shows the two as being quite the match for each other. Something that also comes into play as the two fire-off back and forth on the other cuts, often avoiding purely predictable patterns. The last piece that comes into play is a focus on some shorter tracks (all but “Release My Symphony” measuring up in the 3-4 minute range – much like songs on The Deep and The Dark), which is also a nice eschew from the usual ‘bigger is better’ symphonic approach, and the tighter songwriting comes across as largely positive as they accomplish quite a bit in the shorter timeframe.

Despite being continually hit by rough waters, Visions of Atlantis continue to sail at full-speed ahead. The new vocalist interplay is fantastic, as the rest of the band continues to capture that feeling of adventure and the high seas with plenty of emotion and energy.