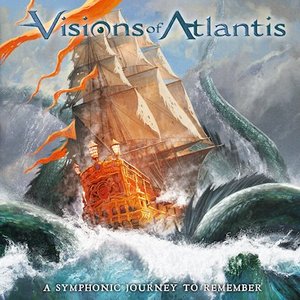 Having just released a live album at the beginning of 2019 (and following it up later in the year with studio album Wanderers), there’s got to be a good reason for Visions of Atlantis to pull out another live release. There’s the pandemic for sure, which means there’s a total shortage of live music to indulge in and bands trying their best to stay active. But outside of that, this live release also features the band alongside the Bohemian Symphony Orchestra Prague for an added bonus.

Recorded at Bang Your Head Festival in 2019, this release covers a massive 17 track setlist. Of course, many of those tracks are from the last two albums but given the change-over in the band, that more or less goes without say. Even this release now features Michele Guaitoli on vocals, whom you may remember took over the vocals on one track with the band’s last live outing (he came fully on board before Wanderers). So if you enjoyed Wanderers and the interplay between Guaitoli and Clémentine Delauney, you are in for a treat, as the two pair off just as well as they do in the studio. The symphonic element is a big part of the band, so hearing it with a symphony orchestra is a nice kudos as well for fans, giving it an even bigger and cinematic flair to truly match what they do on disc. “Release My Symphony” really stands out here, with its extended runtime it makes some great use of the live orchestra and becomes a real showstopper. But even more guitar-oriented tracks like “The Grand Illusion” are given an added boost in the epic department with the orchestra there in support.

Much like their last live release, it’s really all about how much you want to hear/watch the band. Admittedly, the orchestra gives this one a bit of an edge over their previous live album to these ears but it’s not the type of thing to really win over new converts. But fans will have a great time checking this one out, so A Symphonic Journey to Remember delivers all the goods that it needs to.