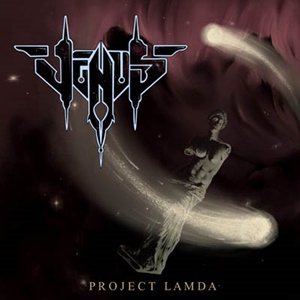 Can’t really be surprised these days that the fusion of sci-fi, horror, and progressive thrash are colliding to make for intriguing collaborations. Greek duo Venus takes all these aspects to heart in this debut four-song EP Project Lamda. Even though most would consider four tracks a sample size, given the fact that half the arrangements possess a runtime of over eight-minutes (the title track the longest at 9:18), there’s plenty of information to process, especially for those who love influences across the blackened, speed, or avant-garde landscapes.

Giorgos Verginis and Antonis Avtzis handle the guitars and vocals for this release – the former bellowing the harsh voices, the latter tackling the clean aspects. Their axe interplay runs all over the map – crunchy and technical when necessary, plus heavy or melodic at the drop of a proper transitional movement. A circular, exotic-laden riff before the shred-worthy lead break puts “Helios Abandoned” near the forefront of early favorite, containing a lot of early Vektor and Voivod-ish atmosphere when it comes to the progressive shifts and intricacies, even with the softer piano intro and conclusion. When they choose to join in clean/harsh tandem for the verses of “Multilingual Monstrosities”, you get this left of center Cynic/Anacrusis vibe while the music pushes out some energetic latter-day Death/Immortal textures against some Megadeth-oriented thrash charge. The somewhat flatter drum programming maneuvers hopefully may be transformed for the next release into hiring a human percussion element, as these musicians deserve to flesh things out properly with their obvious talent at instrumental proficiency plus pushing songwriting / style choices to the limit.

Plenty of underground followers seek out these artists that push limits and release material that takes numerous playbacks to fully absorb, process, coming out the other side a transformed, appreciative listener. Venus with Project Lamda is one of those progressive thrash/power releases that has the extreme angles to provide a decent platform to build upon for the future.