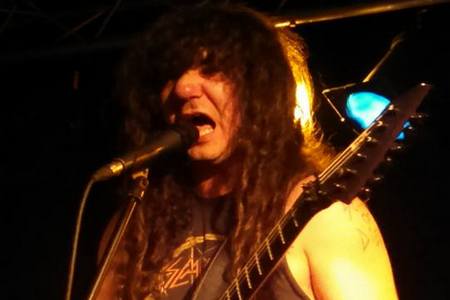 Winter weather rears its snow-apocalypse wonders the morning of this headlining set for Philadelphia, PA’s progressive sci-fi thrash quartet Vektor – so much so that some of their planned merchandise was stuck en route because of the blizzard moving up the coast. The faithful metalheads get used to the chances of inches (or feet) of snow- thankfully the roads cleared up by mid to late afternoon and the show went on as planned. The Outer Space Ballroom is a venue in a part of a warehouse which also houses an all-ages club called ironically enough The Space. Many quality craft beers from local breweries are on tap, in addition to a decent selection of food/pub items. The venue had a decent size stage elevated a good 4-6 feet off the ground, providing proper sightlines from any vantage point.

Doors open at 8pm and first up for the evening would be Connecticut’s own Warm. The four-piece play an experimental form of post-metal, containing a lot of alluring atmospheric set ups and sledgehammer heavy changes – to the point that they keep you guessing song to song. Elements from Black Sabbath and Tool to Neurosis came up when taking in their originals. Vocalist/ guitarist Michael Taylor has a swaying, hypnotic manner to his vocals and can be equally spasmodic in his axe motions. Promising their new album is going to be out ‘sooner than Guns ‘N’ Roses Chinese Democracy’ (in the next month or two), their half-hour set received a decent audience response from the early goers.

Next up from Portland, Oregon would be the experimental metal trio Eight Bells. Containing two lead singers in bassist Haley Westeiner and guitarist Melynda Jackson (the former able to switch up from clean to extreme in the drop of a measure), along with drummer Rae Amitay hooked the 80-90 patrons right from the first echoing pattern that built in intensity and emotion. Haley played a six-string bass in a semi-lead fashion, channeling some of her inner Geddy Lee, while Melynda used an array of reverb and effects tricks to extend a lot of her parts into that spatial groove almost on a telepathic basis. A song like “Hold My Breath” funnels the alluring mind trip that Pink Floyd offered throughout their career but put through a rougher prog/avant-garde metal blender, Melynda enchanting with serene, almost 80’s-like nu-wave melodies for contrast. The new album Landless could gain hefty sales if the band continue to impress live on their current tour with Voivod and the last band we would see this evening.

Vektor are an entity unto themselves. Progressive sci-fi thrash doesn’t begin to encapsulate the crazy riffs, furious tempos, galloping bass runs, fluid lead play and wild Mille meets Rob Urbanti in a park screaming melodies of guitarist David DiSanto. Previously hitting the Outer Space on another tour with Eyehategod and Iron Reagan in 2014, this headlining gig would get their feet wet for their month long sojourn opening for Canadian legends Voivod.

Doing what they want right from the start as the 10-minute, 23 second “Cosmic Cortex” rolled along, the audience stood in awe as the foursome whirled their fingers and feet to tornado speed – so much so that drummer Blake Anderson would knock his hi-hat stand down three minutes in and had to wait until the concluding moments to get it situated properly again (maybe the two finger salute you gave it helped, eh Blake?). Intertwining a couple of new songs into the set from their forthcoming Terminal Redux album like “Psychotropia” and “Ultimate Artificer” amid the favorites from the first two albums, Vektor in 65 minutes just takes the style of thrash to their own nth degree level of virtuosity, energy, and craziness. Favorites included “Tetrastructural Minds”, “Black Future”, the epic “Accelerating Future” and set closer “Asteroid”. The 100 or so attendees got their money’s worth in entertainment – musicians and fans alike can take their material in on a cerebral, visceral, or multi-angle perspective.

If you haven’t seen the band in any incarnation and you are a lover of progressive thrash, this would be the tour to see them. 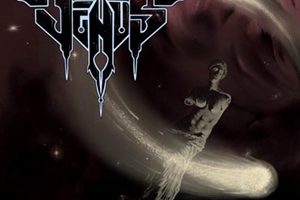 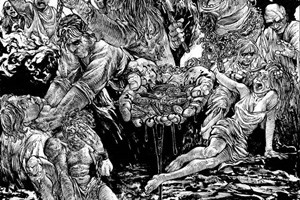