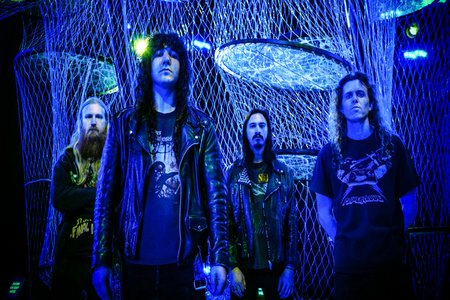 Performing in a niche sub-genre of thrash where intelligent sci-fi lyric concepts match equally intriguing progressive musical foundations, Vektor knows going in that they aren’t going to probably reach the widest appeal. And that’s okay- because through their two previous records Black Future and Outer Isolation have reached critical heights and fervent band/ fan adulation because of the sizzling synthesize of raspy vocals, twin high octane riff action, and incredible progressive tempo changes as the quartet run circles around their contemporaries.

Terminal Redux is the third album, another record that pushes parameters beyond their Voivod meets Agent Steel/ Sacrifice layers into more dynamics, including the incorporation of clean vocals for the first time as well as a full on concept record taking inspiration from old school hallmarks Rush. Intricate and intoxicating, well on its way to being this scribe’s record of the year- especially after taking a couple of the songs in live early this winter prior to their trek with Voivod. Reason enough for me to seek out vocalist/ guitarist David DiSanto and learn more about the five year lapse between records, future plans, and where his love of sci-fi and science started from his father’s love of film at a very young age beyond Terminal Redux talk.

Dead Rhetoric: How does it feel to finally get Terminal Redux out to the public after the long break between albums? I’d imagine that writing and recording this material because of its technical, progressive qualities for a sci-fi oriented thrash band is the main reason why we don’t get a new record every 2-3 years from you correct?

David DiSanto: Yeah, well it’s a bunch of factors. It feels fantastic to finally have this out. We finished recording the album back in August of 2015, that was when we finished tracking. It took a long time to mix this, because basically we recorded all the guitars straight into a laptop, we did the drums and vocals in an actual studio. We took all the raw guitar signal files and had everything sent over to our guy Byron (Filson) in Phoenix. From there he re-amped all of the guitars and mixing this huge album like a whole country away- a lot of emails were sent back and forth to say the least. We recorded it all in Philadelphia, and sent it to Arizona with our guy who had recorded our last two albums. A back and forth process that took a long time – so once the album was actually done was in January of 2016. It was so hard to keep our mouths shut and just release the album out there.

This time in particular took a really long time because of the scale of the concept- all the music in it. Another factor was maybe 4-5 years ago we moved the whole band to Philly from Arizona, that set us back a little bit writing-wise for getting new jobs, getting new places to live.

Dead Rhetoric: This is the first concept record for Vektor – which comes first, the story outline or the music, and is it a challenge to make everything fit accordingly, especially given the band’s propensity for longer, epic arrangements?

DiSanto: It was a mix of both. The music probably came first, and then the story in stages. “Charging the Void” was one of the first songs I had kind of completed, I had a few riffs that would become other songs. “Charging the Void” inspired me, the title track from Outer Isolation into a bigger storyline. From there… it was in a way it was halfway inspired by Rush’s Hemispheres album. There’s a line that says ‘we will call you Cygnus – the God of balance you shall be’. I heard that 15-16 years ago and that has been echoing around in my head. It lead me to do some more research about Cygnus – the myths and the legends and it really fascinated me how this bird sitting atop this tree like a band in the Milky Way – a river of souls and at the top was this ruler Cygnus. From there I put this story together with this overall concept in mind. At that point I was writing for the concept- if that makes any sense. I was placing musical material to fit in. I wrote things out of order though- kind of how some movies are made (laughs). I knew where they would be sitting at the end of the writing.

Dead Rhetoric: Which particular songs were the most challenging on this record to develop?

DiSanto: By far it was the final two, “Collapse” and “Recharging the Void”. I must have had hundreds of versions of both of those songs. At one point “Recharging the Void” was going to be about 20 minutes long, and it had so many parts that I had to subtract and delete a bunch of these things. I needed it to fit the overall story and I didn’t want that last song to be too overwhelming. Those were the biggest challenges for me writing because those were definitely the most different styles- I pushed the boundaries a little bit further with our sound most with those two songs.

Dead Rhetoric: You introduce clean vocals on a couple of tracks as well as some special guest from the Philly Soul Singers- was it scary to expand your horizons, especially on a track like “Collapse”?

DiSanto: Yeah. I was terrified of trying out clean vocals. It’s something I’ve never tried before. I didn’t even have the lyrics ready for those songs until before we went into the studio so the Philly Soul Singers guests didn’t get to practice them. I was pretty nervous about trying it out- I was originally going to sing them in a softer, raspy more normal style. As everything was coming together I knew that the clean singing is what needed to be done.

Dead Rhetoric: How do you believe the tour with Eight Bells and Voivod went for the band overall? I would imagine this was a dream come true outing for the band…

DiSanto: Oh yeah. (Voivod) has been one of my favorite bands for at least 15 years now, and they actually asked us personally if we wanted to do it- and of course we are like ‘Hell, yeah!’. It was amazing, getting to meet your idols, your musical heroes, getting to hanging out with them every night, those guys are so cool. Away is the nicest guy in the world, Snake is such a good story teller – every night after we played it was story time with Snake. He told us a story about how he got his legs caught in a cement mixer for like 20 minutes that was so awesome. Dan is a comedian man. One show back stage Dan gave me a little guitar lesson, he taught me how to play “Roundabout” by Yes, so that was really sweet. We got a lot of praise from every show – I was actually surprised because in my head I figured most of the people knew about both of our bands because we always pop up in the same paragraphs together. We made a lot of new fans and people that hadn’t heard us, it was a good thing.

Dead Rhetoric: Being the last album on Earache, are you hopeful that you’ll be able to find a suitable new record deal, or will the band consider going down the crowdfunding horizons and keep things even more independent these days?

DiSanto: Honestly we have no idea. If we go the label route, it’s going to have to be a killer, awesome deal. The dream is to be able to quit our day jobs- or at least only have to have a part-time job, so we have time to actually write music. If a label offers us a sweet deal, we’ll take it- but we have been tossing around the idea for several years now about doing things on our own at this point with the internet and everything. But we don’t know- first we are just going to focus on touring a lot for this record- and probably approach that closer to when we are writing for the next album.

Dead Rhetoric: You all have day jobs, and Erik is going to be a father soon. Can you explain to the readers the challenge Vektor face in terms of building their profile playing a type of music that could be considered very niche and trying to make any sort of money from your craft?

DiSanto: Yeah, exactly. That’s the challenge that we all face. It’s a catch 22 really. Because we all have full-time jobs, any album takes forever. Especially because we spend so much time fine tuning the small details. It’s really hard to find time. For us it’s something we can’t turn off- it’s what we love doing and it’s hard to describe why we write music and play music. It would be awesome to make money off it but us playing what we play that’s not our main objective- we just love doing this. It’s almost like an obsession.