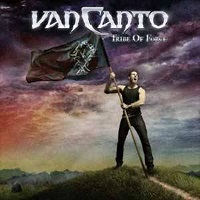 A Capella speed/ power metal from Germany here. Tribe Of Force represents Van Canto’s third full length, shifting to more original material and less of a reliance on cover versions. I know a lot of times in the metal world you think everything has already been done – well, this sextet certainly tip the idea of instrumentation on its ear.

Outside of a real drummer, all of the voices handle the bass, keyboard and guitar parts- along with multi-part vocal harmonies. You would think the material wouldn’t translate to a heavier setting, but thanks to Charlie Bauerfiend’s (Blind Guardian, Helloween) production thump this feels less like a barber shop quartet and more of a larger, theatrical effort (minus the cheesy Rhapsody-orchestral symphonics).

Guests include Grave Digger’s Chris Boltendahl on Van Canto’s interpretation of “Rebellion” and Tony Kakko (Sonata Arctica) appears on the faster “Hearted”. As far as the original material, “To Sing A Metal Song” intrigues me with the shifting bass/ normal voice riffing dexterity over the lyrical ode to concert audiences while “WaterFireHeavenEarth” contains more of their female led gothic side, more in line with current Nightwish. You do get the occasional injection of lead guitar lines, while drummer Bastian Emig showcases his skills in traditional, power, speed and thrash kit work throughout.

The highlight for me was their insane interpretation of “Master of Puppets.” Low vocals growling out the bass and furious instrumentation, other vocals handling the time changes with the greatest of ease, they really understand how to tackle complex, classic tracks. The way they explore choirs for harmonies, the seamless transitions – Van Canto illustrate that open-mindedness exudes confidence and originality.

When I need something left of center, Tribe Of Force will be the album to return to again and again.