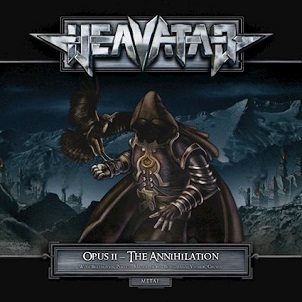 A side venture for those who don’t quite get Van Canto’s a cappella metal (we do), Heavatar features lead VC throat Stefan Schmidt, alongside drummer Jörg Michael (ex-Stratovarius and literally 85 other bands), lead guitarist Sebastian Scharf and bassist Daniel Wicke. The idea, in effect, is to take those multi-layered, dominant choral choices out of Van Canto and place them into a regular metallic context. The band’s 2013 Opus I – All My Kingdoms certainly passed the muster; so does the aptly-named Opus II: The Annihilation.

Operating under the question of “What would it sound like if Beethoven, Mozart, Chopin and friends joined a metal band?”, Heavatar isn’t as overblown as surmised. Schmidt, as he wont to do in Van Canto, has a tendency to take over songs without really trying, such is the tenor and tremor (!) of his voice. In Heavatar, he doesn’t have to share vocal duties as he does in Van Canto to ensure there’s layered weight and heft in the chorus, which there are, most notably on the flighty “None Shall Sleep,” “Purpose of a Virgin Mind” and “Hijacked by Unicorns,” which may take some explaining from the band.

However, the expected epic thrust and domineering are prevalent throughout, capping off with “A Look Inside,” a puffed-out-chest, orchestra faring number that serves as the album’s obvious highlight. Opus II: The Annihilation never quite teeters on the brink of being “too much,” if you catch our drift. Heavatar has scattered about enough true-form metal riffs and power metal basics that they fit comfortably aside the style’s most explosive and prancing acts. And look at it this way: If Van Canto ever goes belly-up, Schmidt can land quite comfortably in Heavatar and not lose a dash of pomp.