Tyr – By the Light of the Northern Star (Napalm Records) 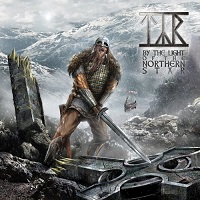 We’re barely a year removed from the quite excellent Land and here comes the even more excellent By the Light of the Northern Star. It’s no coincidence that Tyr are perhaps the preeminent Viking/folk/Pagan/whatever metal band – they continue to forge their own imitable, striking stamp on a sound that is growing increasingly stale. With By the Light of the Northern Star, Tyr injects some much-needed vigor into a steadily rotting creative corpse.

Still operating without gimmicks or a schtick, Tyr’s understated bombast is in full-force here, as singer/guitarist Heri Joensen leads the charge through nine songs, all keepers, no duds. Even the partially hokey, hurky-jerky opener “Hold the Heathen Hammer High” (that chorus makes one want to do a jig) is charming.

Where Tyr has always made its bread is in the valiant, heroic sonicscapes of songs like “Into the Storm,” which is a definite album highlight, stocked with full-bodied melodies and a monster chorus. We could also make the same case for “Northern Star” which starts with some cool chanting and “Turid Torkilsdottir.”

Even as the album progresses towards it latter stages, Tyr manages to keep things interesting. There’s a certain depth and inherent accessibility to these songs and if we have to make this distinction for the 800th time, we shall do so – Tyr is to this era as Borknagar was to the late 90’s post-black metal/quasi epic metal scene. When songs possess such craftsmanship and gusto (see: The Archaic Course), one can’t help but continue to champion Tyr’s cause. Right on, lads.