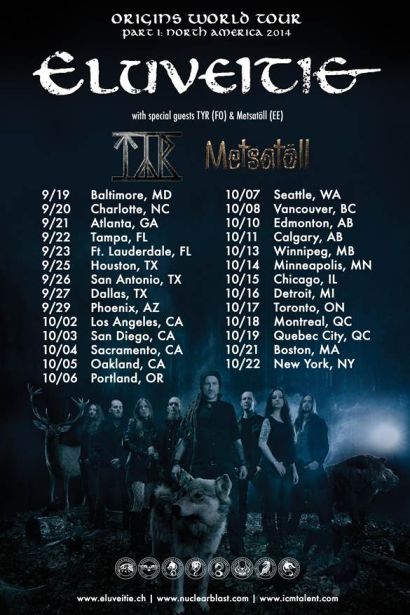 Swiss folk-metal pioneers ELUVEITIE will return to North America for a headlining tour this fall. The band will be touring in support of their follow-up to Helvetios (2012), with the release of their new album, Origins, this August.

“In September, 2013, our massive Helvetios world tour came to a well-deserved end. After just over 200 shows, spread over three continents and including over 30 countries, it was time begin work on a new album,” comments drummer Merlin Sutter. “Now that we’re finally holding Origins in our hands, we can’t wait to share it with you – and what better way to do so than with a tour! We are extremely excited to kick off our new tour in North America this time, and you can expect us to make every single night one to remember. We’ll bring along some of the most exciting new ELUVEITIE music yet, as well as a hand-picked line-up featuring our friends from the Faroe Islands, the magnificent Tyr, and the excellent Metsatöll from Estonia. See you this fall!”

Origins will be released on August 1st (Europe), August 4th (UK) and on August 5th (North America) via Nuclear Blast. Cover artwork was created by none other than the group’s mastermind himself, Chrigel Glanzmann. Origins was recorded once again with producer Tommy Vetterli (Kreator, Coroner) at New Sound Studios in Switzerland.