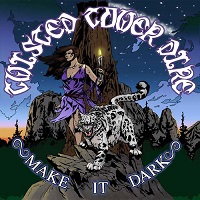 One of the long-standing bands on the “true” American metal scene, North Carolina’s Twisted Tower Dire have been able to exist for so long (read: over 15 years) because of their steadfast commitment to traditional metal. Granted, it was totally passé to be a true metal band in the 90’s, but if anything, it has hardened and honed the band into one of the scene’s more dependable acts. With their latest Make It Dark, TTD appropriately make a big splash…and it’s not because there’s an awesome snow leopard on the cover.

New singer Johnny Aune (who replaces the deceased Tony Taylor) is the de facto item here. Aune sounds (at times) like a dead-ringer for former Lost Horizon singer Daniel Heiman, who in the span of two albums roughly a decade ago, set the power metal world afire before bombing out. Nevertheless, Aune is a total monster on the mic, with a full-bodied and feisty tone to him that takes over songs like opener “Mystera” and closer “Beyond the Gate.” Being this is his first go-round with TTD, some great things should be expected down the road from Aune.

For the most part, Make It Dark takes a joyride down the usual Maiden-loving terrain, as bombastic guitar harmonies highlight the title track, and pulsating gallops lead the charge on “The Stone.” Even the fun “Torture Torture” has a fun, 80’s sing-a-long chorus that is sure to rile up the Euro crowds, who have always been staunch supporters of the band.

In what should be their introduction to those outside of the traditional/classic metal scene, Twisted Tower Dire couldn’t have timed it better with Make It Dark. This thing reeks of professionalism and smarts, and when people catch onto Aune’s leather-lunged pipes, it’s going to open a lot of doors for a band that unfortunately, has had a lot shut in front of them. Make It Dark will make unbelievers, believers.