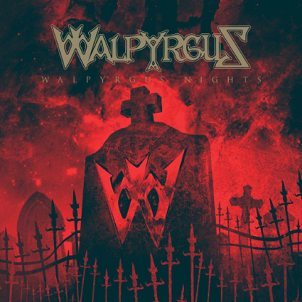 Walpyrgus has lots of friendly faces poking around, from Daylight Dies (!), Twisted Tower Dire and While Heaven Wept, conjoined by geographical proximity (Raleigh, North Carolina) and an affinity for classic metal. You never really know how to digest these type of bands, for some seem to sputter before a full idea is realized, while others appear to know what they’re doing. Clearly, Walpyrgus does, working up a full, old-school metal lather without succumbing to desperate-dungeon clichés or over-played riffing on their first proper full-length, the appropriately-titled Walpyrgus Nights.

Out front is Twisted Tower Dire throat Jonny Aune, whose distinctive caw has benefited many a song in his primary outfit and does so here. He has this near-upbeat edge to his vocals, like smiling while he’s singing (which he’s probably not doing), but it gives the tunes here a bouncy edge, even while NWOBHM rumblings are taking flight. Of particular note is the lead-off track “The Dead of Night,” an easy, free-rocking number and the fun “Dead Girls,” which is light on its feet and content.

Spun are plenty of proper Maiden twin melodies on “Somewhere under Summerwind,” the album’s best song, while a cover of Witch Cross’s “Light of a Torch” holds up the band’s vintage, underground through-and-through ethos. As an extra topping, While Heaven Wept leader Tom Phillips lays down some dominant keys and Hammond organ on “She Lives.”

Fun and playful, but with an edge, Walpyrgus Nights slashes its way through the normally staid channels of classic metal. A fresh entry into the American old-school metal field, Walpyrgus is one of the better “get together to kick out the classic metal jams” bands in recent memory.