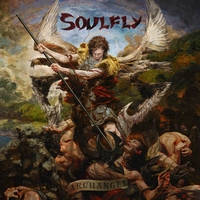 After a rather tepid beginning (the self-titled release has some cringe-worthy moments), Soulfly has evolved into a pretty steady and consistent voice within the metal world. Despite bouncing between Soulfly, Cavalera Conspiracy, and Killer Be Killed, Max Cavalera still has plenty of energy left in him – never spreading himself too thin. Archangel serves to please any and all current Soulflay fans.

Falling in line with the band’s more recent activity, Archangel continues in an aggressive and thrashy approach. Starting off with the anthemic “We Sold Our Souls to Metal,” the band wastes no time in firing up the engines on their tenth release. A song that could have drifted into cheese/goofy territory in lesser hands, Max’s authenticity and love of the scene gives it some endearing charm (and grit). There are plenty of other diverse cuts to dive into. A bit of groove infiltrates tracks like “Ishtar Rising” and the title track while the one-two punch of “Titans” and “Deceiver” give the album a bit of an added punch towards the tail-end of the disc. “Bethlehem’s Blood” serves as the most atmospheric of the bunch, with some added acoustics. Of course, no Soulfly album is without it’s guest appearances and they work for 2 out of 3. Todd Jones (Nails) lends his throat to the churning “Sodomites,” while Igor and Richie Cavalera add some power to the closing “Mother of Dragons.” The odd one out is Matt Young (King Parrot) on “Live Life Hard,” whose divisive rasps will have you either cheering or plugging your ears (the later for this guy).

Hard to do complain about anything Archangel delivers. While it doesn’t really veer off from anything Soulfly has been doing in recent years, it’s a solid reminder that Max Cavalera can still thrash with the best of them. Soulfly is still a force to be reckoned with.