Shadows Fall – Fire From the Sky (Razor and Tie) 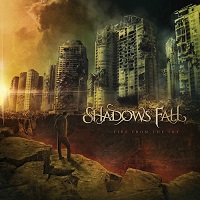 Since there’s no real way to bring their career to the point where it was around 2004/2005, Shadows Fall are doing the smart thing by sticking to what they do best on their seventh full-length, Fire From the Sky. Following a similar thread from 2009’s Retribution (sense a theme here?), Fire From the Skyis stocked with those pure, all-American-by-way-of-Boston metal jams the band made famous over a decade ago. The only difference is that maturity, not youthful exuberance is the spark.

The big selling point here is the production duties provided by Killswitch Engage’s Adam Dutkiewicz, who has put his trademark stamp on some rather en vogue bands of late, including Shadows Fall rivals All that Remains, As I Lay Dying, and August Burns Red. So naturally, the album has a rather palpable metalcore-on-thrash flavor (“thrashy-core” maybe?), especially on “Divide and Conquer,” which nicks the verse riff from KSE’s “My Last Serenade.” Unintentional or not, it’s probably the album’s heaviest moment. Wonder if the two parties had some chuckles over the similarities…

Lots of cool, happening jams here, including lead single “The Unknown,” which is propped up by a crystal-clear clean chorus from guitarist Matt Bachand. Lead vocalist Brian Fair has appeared to hone his trademark man-roar into something more melodic, as heard on “Weight of the World,” “Blind Faith” and the radio-friendly ballad “Save Your Soul.” And while there’s a distinct air of familiarity to a lot of these songs

, it’s not like Shadows Fall have brought out the tracing paper ala Lamb of God. A lot of good ideas are left in the band’s creative think-tank.

Fire From the Sky stands alongside Retribution as another worthy post-major label effort from Shadows Fall. To these ears (and probably many more), the band hasn’t changed very much from their mid-00’s glory days, they’re just a bit more in-tune with what they can do, and probably more risk adverse than ever. Frankly, one can see these guys becoming their era’s Overkill….reliable

, dependable, hardly innovative, but you know what you’re going to get as opposed to being worried about getting what you don’t want.