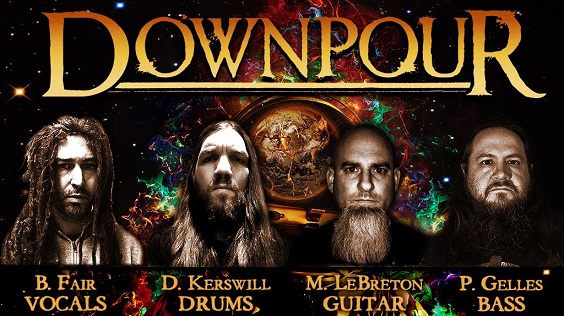 For a lot of metal dudes in their 30s and beyond, the touring ship has sailed. Real-life tends to bring forth such pleasantries like day-jobs, bills, health issues, relationship squabbles and the realization that time is of the essence. Therefore, slogging it out on the road making next to nothing doesn’t seem like much of a good idea. What it does, however, is make band rehearsal and related band functions all the more important, something the guys in Downpour can attest. A quartet hailing from Massachusetts, Downpour has been used as a safe haven for its members, many of whom were going through some of the issues detailed above. The result is a modern, but deep, exploratory self-titled album that riffs through aggro, but melodic metal while forcibly pushing the heaviness and catchiness envelope. Fronted by Shadows Fall vocalist Brian Fair, Downpour already has instant cred based on his involvement alone, but upon further inspection, the rest of the band (Matt LeBreton, guitar; Pete Gelles, bass and Derek Kerswill, drums) truly steer a ship that should remind a lot of folks what good, old-fashioned Massachusetts metal sounds like. With that in mind, we snagged LeBreton for a chat of the email variety. Read on…

Dead Rhetoric: It’s noted in your bio that Downpour was created as a respite from real-life responsibilities. As you (and we all) inevitably get older, how important is it to have something like Downpour in your life?

Matt LeBreton: Downpour is extremely important in my life. When you find a few guys who can take your ideas or riffs and bring them to life as these guys do, that’s something to cherish. As a guitarist, I’m always writing riffs and each riff has its own story. You can remember what was going on in your life when you stumble across an old riff. Every time I bring new ideas to Downpour, Derek and Pete totally lock into not only the groove, but the feel and just make it that much better.

Dead Rhetoric: Would Downpour have the same impact for you if, say, it was your full-time job?

LeBreton: That’s a great question. While that’s always the dream, we make Downpour work because we absolutely love what we do. It would certainly make things easier to jam and write if the band was our full-time job. I think it would probably have an even bigger impact for me if that’s all I had to focus on.

Dead Rhetoric: You’re starting Downpour from the ground-up. Describe the work that has gone into building the band thus far.

LeBreton: Man, I don’t even know where to start with this one ha-ha. At the time that Derek and I first started jamming, I was working 3-11 with Tuesdays and Wednesdays off. The guys were able to make Tuesday nights our jam night. At first, we had more of a rock sound. But as we kept jamming and life kept throwing curve balls…we just started getting tighter and heavier. While I was going through a divorce and losing my house, Pete had just been laid off and Derek was having a lot of issues as well. But, we made it work and kept jamming. We then recorded some demo tracks and sent them to Brian hoping he’d be interested. When he got back to us saying how much he loved the material, we were stoked. The work Brian put into these lyrics was just perfect. And watching him push himself in the studio like he did was surreal. A lot of the lyrics are written about dealing with death, substance abuse and real-life issues that we all face as we continue to grow. We have a lot of material written and I can’t wait to get it recorded.

Dead Rhetoric: What makes this lineup work so well together?

LeBreton: I think we all complement each other and work together. The song comes first. You see too many times in bands where some guitarist just HAS to have a riff in the song that doesn’t really fit…but he’s put his foot down and he’s jamming that bastard in there whether it fits or not ha-ha. Derek and Pete tend to bring me back if I go a little too ADD. We all seem to know when to push each other and when to pull back.

Dead Rhetoric: Having Brian in the band certainly helps with the visibility factor, but, it also creates the problem of people thinking it will sound like Shadows Fall. Have you encountered that yet?

LeBreton: Oh, absolutely. You can’t make everyone happy. I love Shadows Fall. I remember my buddy showing me Somber Eyes to the Sky and I just thought the guitar playing was so on point. I’ve loved Shads ever since I heard that album. But we write music for us and hope that people enjoy it. I’m not going to try to emulate a certain sound to make other people happy. I hope people dig our album, but I think it’s a mistake to have certain expectations when you listen to any newer band.

Dead Rhetoric: How would you describe your songwriting style? You don’t really pull from one exact style on the album – there’s just a lot of heavy, but interesting riffing mixed with melody.

LeBreton: Some of these songs came from riffs I had written when I was in a bad place mentally. I write from how I feel. “Astral Projection” was written in my basement as my home life was falling apart. I didn’t think anyone was really going to like it, but when I brought that song to the guys, they loved it and just made it rock. Some of these songs were written on the spot in our jam space. But the overall idea is to capture the moment and express how you feel.

Dead Rhetoric: There are some experimental moments on the record. What spurred those?

LeBreton: Just before Derek went in to record drum tracks for the whole album, I came up with the guitar parts for “Still Waiting.” I wanted to add a little dimension to the album but still keep a dark/heavy feel. Once it was recorded, the guys thought it was great. Derek had the vocal lines repeating over and over again while he was with his grandfather in the hospital. It fit perfectly into the acoustic track which then became “Still Waiting.”

Dead Rhetoric: What will the live show approach be for the record? Regional dates?

LeBreton: Hopefully at some point early next year we can start playing shows. We all would love to.

LeBreton: Well, we have a lot of material already written. Some material is already recorded and just needs vocals. So, we shall see!