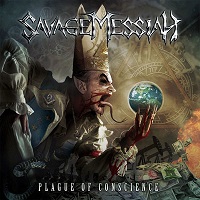 Seems to be that there’s a legitimate “Big 3” of British thrash brewing, comprising of Evile, Sylosis, and the band in question, Savage Messiah. The trio is close in a lot of facets, especially in their attention to technicality, beefy production jobs, and attempts at advancing thrash. This is in stark contrast to what’s going down in the States, where bands

think that anything beyond 1988 isn’t worth copying, but let us digress…Savage Messiah could eventually be a major player in a few years.

Plague of Conscious is the band’s second full-length, and first for the heralded Earache label. Singer

/guitarist/founding member David Silver is often the point of focus, parlaying his meaty clean vocals into some fire-branded moments, like on “Carnival of Souls,” which is a proper take on latter-day Testament, only driven home by Silver’s springy chorus takes. In rare moments of laying off the thrash pedal, Silver proves to be a versatile vocalist, offering up some choice moments on album highlight “In Thought Alone.”

The band has done their thrash homework, finding the ever-elusive niche between Alice In Hell-era Annihilator and the aforementioned Testament. Wisely staying away from the Lombardo beat-happy pace laid down by most thrash bands, Savage Messiah manages to turn songs like “All Seeing I,” the single-oriented “Beyond A Shadow Of A Doubt,” and triumphant closer “The Mask of Anarchy” into varied, forward-thinking concoctions that should help the band get some nods from the traditional metal community.

About as good as anyone to emerge out of the thrash community of late, Savage Messiah find themselves virtually too good to be a straight-thrash band, so if the band and label play their cards right, SM could find them several paces ahead of their countrymen. Plague of Conscious is certainly a step in the right direction…and out of the thrash gutter.