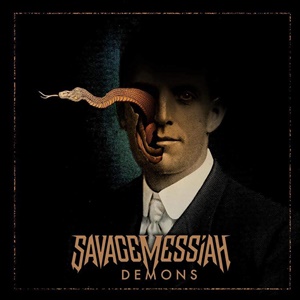 The fifth studio album Demons from UK power/thrash band Savage Messiah comes at an interesting crossroads for the quartet. Establishing themselves with a decent melodic/NWOBHM penchant against their Megadeth/Metallica influence tree, their previous 2017 effort Hands of Fate signaled a more commercial slant, the hooks and grooves a bit catchier. Two new musicians have entered the SM confines (welcome guitarist David Hruska and drummer Charly Carretón) – and curiosity abounds as to whether the group delved back into their past discography or have continued forward in a more commercially viable platform.

After a few spins, it’s evident that the band choose to split things down the middle as far as serving up a record that contains heavier, crunchier affairs along with the obvious ‘radio friendly’ numbers that possess the requisite melodic hooks and choruses 90’s Metallica followers pound into their brains. Dave Silver and David Hruska lay down some circular, crunchy riffs for “Under No Illusions” that even contains a bit of extreme tremolo picking action during the conclusion, while the follow-up “Down and Out” contains a semi-progressive rhythm foundation that sits side by side with a lower Machine Head-like groove sure to get crowds pummeling and pouncing if a part of the live setlists. The opening double kick/ melodic death-oriented keyboard/guitar sequence for “Virtue Signal” keeps the first half of the record on an energetic high, even as the obvious clean guitar commercial hooks and harmonies penetrate “What Dreams May Come”- Dave choosing to be very emotional in the verses and rise to a modern rock-like phoenix during the chorus. Certain staccato/groove music parts (especially on the semi-ballad “The Lights Are Going Out”) are dangerously close to invading Nickelback/Alter Bridge territory, which is a shame as most Savage Messiah fans probably would prefer more of their British heritage and less obvious attempts to gain a wider following through these simpler tricks.

If you loved the first three Savage Messiah albums, tracks like the ball-busting “The Bitter Truth” and “Rise Then Fall” will appease your tastes. Overall, Demons showcases a band in transition, fence-sitting between the past and present which could prove problematic in establishing where they want to go down the line. Color this one adequate yet slightly disappointing.