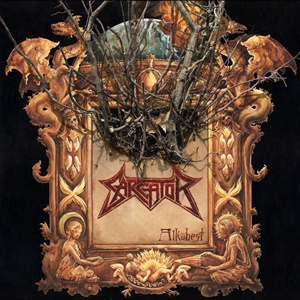 To be young once again – youthful exuberance on full display with this Swedish quartet Sarcator for this second album Alkahest. Currently between 17 to 23 years of age, they’ve already released a self-titled album in the fall of 2020, also gaining accolades through local radio listeners for a P3 Guld award as best Swedish metal group in 2021 – losing unfortunately to LIK. Nevertheless, these nine songs possess quite the versatile attack, the mishmash of influences across death, thrash, and blackened prisms sure to align well with passionate metalheads seeking out fresh artists that produce potent, primal driven material with performances to match.

One standout aspect that could certainly reel in even the casual fans is the vicious, raspy roar doubled with sinister lead guitar play from Mateo Tervonen – the son of The Crown guitarist Marko Tervonen. With the father behind the boards for recording/mixing/mastering duties, this allows the musicians to sharpen their creative blade – the results alluring between the eight vocal-led cuts beyond the stunning, left-field 7:47 “Sorrow’s Verse” instrumental piece. Certain tracks contain a haunting 80’s atmosphere like early Mercyful Fate / Iron Maiden ramped up into blackened thrash terrain – be it gallop or groove enhanced in a tradeoff manner for “Grave Maggot Future” or chunky mid-tempo malignance with fancier timing transitions during “Devil Sun”. Where the debut may have been more compact in ideas, this record allows the four-piece to expand in terms of instrumental abilities – the opening 90 second sequence for “Dreameater” very Metallica-like in building momentum for the subsequent riffs that shift for heavier to lighter colors over the course of this almost seven-and-a-half-minute arrangement. Closing with the epic title track which contains fluid, circular guitar runs, drumming that fuels a tribal, progressive whirlwind ride, plus a quieter instrumental section where the bass takes the lead against some psychedelic, bone chilling axe action – it’s quite enthralling to have talent pushed in a way that’s authentic, organic, heavy yet remarkable in its inherent melodic charm.

When you want full-force blasting insanity – opener “Ascend” should hit listeners in all that Dissection/ Kreator-ish feels. Hail Sarcator for delivering the best of the 80’s/90’s in blackened thrash without compromise while remembering the key hooks necessary for mandatory airing again and again. Alkahest has underground teeth to take a bite out of the veterans and help them elevate their game.