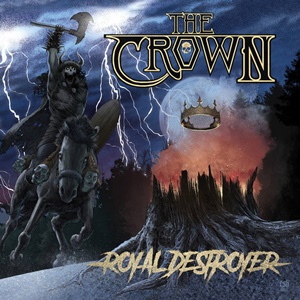 Long running death/thrash purveyors The Crown show no signs of slowing down in versatility, punch, and execution. Their last album Cobra Speed Venom spit crushing riffs at various tempos, factoring in a love of punk, grind, melodic, and extreme angles into their conventional style. So it shouldn’t be surprising that Royal Destroyer as the follow-up takes those aspects and dials up the fringes an extra notch – possibly adding in some doomier facets while not sacrificing the menacing aggression and passion for death/thrash that have been part and parcel of the quintet’s outlook since the start of their career.

Paying tribute to the furious picking and sheer tenacity of Slayer through “Let the Hammering Begin!”, segments shift from wild blitzkrieg lead work including divebomb sweeps, vicious roars in the vocal department, plus interesting zig zag drum/guitar interplay. Midway through shorter bursts of straightforward thrash/death like “Full Metal Justice” and “Scandinavian Satan” assault the senses as if these band members are channeling the angst, anger, and bitter energy of their youth – adding in the right melodic hooks in the main passages for tasty returns. The track that probably will gain most inspection is “We Drift On” – as close to a ‘ballad’ as you’ll ever hear from the group. The guitar harmonies possess a cultural underpinning, the somber drum march and clean transition allowing the heavier riffs to develop more of a dramatic impact – the dual death roars and whispering vocals another dynamic head turn aspect to the good. The polar opposite to a blasting 78 second “Baptized in Violence” opener that sets the tone for proof that The Crown can still put the pedal to the metal in terms of tempo, energy, and speed – the in- your-face production from Fredrik Nordström sealing the deal for another winning top to bottom recording.

Presenting a record that encompasses thirty plus years of interplay and experience for many of its members since the Crown of Thorns days, Royal Destroyer holds up magnificently to the best The Crown has displayed in their discography. Slayer followers, Napalm Death mavens, Morbid Angel maniacs – and all those who love melodic death/thrash would be wise to get this record, devour it, then catch up on the catalog if you are not familiar with these lads.