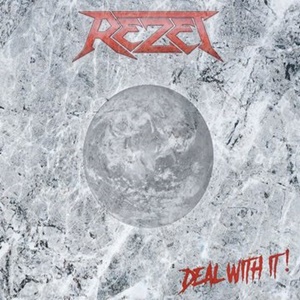 Thrash metal – a genre that blends together supreme energy and musical sophistication, pulling from various sub-genres of a primal nature – has gained quite a resurgence beyond it’s 80’s initiation. Newcomers and the old guard alike reap the benefits with more coverage, more touring interest, and a global audience thirsting for material to slam, headbang, and corral at their next social/party gathering. Rezet are one of those relative newcomers (established in 2004) that have wasted no time in making their presence felt: five demo releases and an EP prior to their Have Gun, Will Travel full-length debut in 2010. They’ve released two other albums, each on a different label – making Deal with It! their fourth album for another label in Metalville, such is the landscape of the industry these days. And after a few passes through the ears, it’s evident that this German quartet pull from more of the Bay Area scene for riffing/songwriting inspiration, keeping the machine moving at mid-tempo to slightly faster paces.

Stop/start rhythm section to guitar activities allow for nifty lead break noodling and gallop-inducing activity – even when the vocal melodies are clean and commercial-oriented during first half attention-maker “No Plan B”. Ricky Wagner and Heiko Musolf execute their axe attack smoothly and in steam-roller fashion – coupling the best of Exodus and early Metallica with stairstep, adrenaline-fueled chord progressions and fiery lead combinations filled with shred, divebombs, and tapping tricks. Grasping the fact that even thrash can’t be stuck in high gear for an entire album, the controlled aspects of “Thunder Raiders” and semi-ballad “Alone” showcase an affinity for NWOBHM and melodic hard rock inspiration, even though Ricky isn’t necessarily in his best melodic element vocally for the latter through his semi-snarky talk meets clean nature. Overall the record captures interest because of its perfect nature to go for the appropriate musical hook and channel it up, down and across the metal spectrum – you’d be hard pressed to not engage favorably to the gang vocals and grooves within “Chaos in My Mind” or the intense jackhammer double kick/riff parade for “Spiral Down”. This is also a case where the cover may not necessarily explain the contents – the stone graphics and encased skull ensures its metal, just not necessarily a prototypical ‘thrash’ cover a la Ed Repka.

Eleven tracks in 41 minutes, Rezet use their love of Bay Area thrash, NWOBHM, and even melodic hard rock to deliver a dynamic record that will appease most people who like a beefier, modern production aspect to this genre. 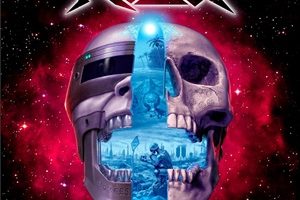