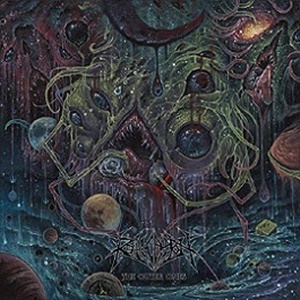 Fortunate to enjoy the ascension of this Boston-based band from youth to current times (yes, this scribe remembers the early Cryptic Warning days opening for other locals at all-ages venues around New England), Revocation rely on their intuitive capabilities to traverse the progressive/technical landscape of thrash and death metal to a faithful following. Since moving to Metal Blade with 2014’s Deathless – and adding some clean vocal twists to the follow up Great Is Our Sin – it’s obvious that the quartet do not feel any danger for switching things up in their formula. It shouldn’t be surprising then for the seventh album The Outer Ones that Revocation reach into their early to mid-90’s affinities for death metal, pile on some progressive thrash into the mix, and come away with another mind trip of a recording through these nine songs.

A main key that aids the brain retention for the songwriting are the ‘earworms’ spread throughout song to song – often appearing after a series of impressive off-time maneuvers and scattershot spray of riffs and rhythms. Key ones that are sure to cause crowd swells and walls of death include the “Davidian”/Machine Head-like conclusion to “That Which Consumes All Things” or the upward/downward low bend action for the final segment of the title cut (4:35-5:42 specifically). David Davidson just has this sinister roar and growl combination that sends chills down the spine and yet isn’t so low that you can’t make out his words – the horror and historical themes coming to life during “Of Unworldly Origins” and “Vanitas”. When you have ace proficiency at all the instruments, it’s best to use those assets to maximum advantage – of which drummer Ash Pearson and bassist Brett Bamberger get those chances, their best respective works taking place during the Voivod meets Death in a dark alleyway “Fathomless Catacombs” and “Luciferous”. Ending on a semi-epic note for the 7:15 “A Starless Darkness” that features some nifty traditional twin harmonies, morose doom riffs, and drop on a dime speed blast/ high tremolo action, it’s clear that nothing is off the table for Revocation to deliver jaw dropping death/thrash songs that are advanced, well thought out, but also retain that key catchy hook, refrain, or segment that causes incessant headbanging.

Delving into more of their death and progressive thrash influences this go around (no clean vocals here), The Outer Ones proves Revocation as leaders and innovators of a metal scene that desperately needs them for the vitality and future of the movement. 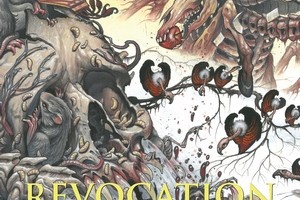