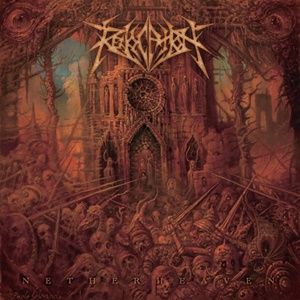 The eighth studio album Netherheaven comes at a transitional time for Boston-based act Revocation. Known best for intertwining aspects of thrash and death metal in a technical/progressive way, parting ways with second guitarist Dan Gargiulo in 2020 sees the group back in a power trio format for the first time since 2009’s Existence Is Futile. With David Davidson at the main helm as guitarist, vocalist, songwriter, and producer, rest assured that the volatility of aggression as well as synchronicity within the intense musicianship flow remains at a high level – creating an effort that channels more of their death influences yet still being circular in terms of melodic components and earworms.

Amidst the layers of challenging rhythms chock full of intense picking and progressive chord combinations, David also has a way of touching the right tasteful note in specific, thoughtful lead breaks that contain lighter jazz-oriented sequences or runs pushed into a metal context to push “Lessons in Occult Theft” to the forefront of encoded new favorite status. Properly engaging the listener in material that has sophisticated musical passages needs that controlled temperance from time to time – which these musicians achieve song to song, quickly shifting gears to effectively allow “Nihilistic Violence” and the slower, steady low-tuned chugging “Godforsaken” to crush the aural landscape in shape shifting, colorful textures. When Revocation chooses to accelerate velocity through blast beat sections that are high on the BPM chart, you’ll often get the counterpoint progressive bass lines from Brett Bamberger during “The Intervening Abyss of Untold Aeons” that add depth to the Gorguts meets Death-like proceedings. Two special guests well-known in the death/extreme metal community lend their vocal talent to the finale “Re-Crucified” – the late Trevor Strnad (The Black Dahlia Murder) and George ‘Corpsegrinder’ Fisher (Cannibal Corpse) – the stop/ start measures super tight while the tremolo / triplet picking plus slower, left-field instrumental measures heightening the dynamic shifts to conclude the record on another high note.

Jens Bogren adds his professional mixing/mastering knowledge the final output – Revocation in the driver’s seat creatively as veterans following their heads (and hearts) to wherever their musical abilities want to go. In the case of Netherheaven, it’s brutal, technical death/thrash with the proper amount of groove/hook sequences and melodic nuances to get the job done once again, serving up plenty of road worthy material that will once again go down like gangbusters.