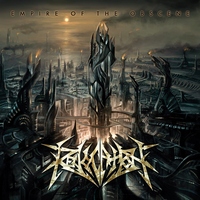 With the combination of Revocation’s self-titled effort in 2013 and last year’s Deathless, it appears that much of the metal world has finally caught up to what Revocation has been cooking since the mid-2000s. With a much higher visibility within the scene, the time couldn’t be better for a re-issue of the band’s first album, the ultra-rare Empire of the Obscene.

Initially released back in 2008 and limited to 1000 copies, Metal Blade and Revocation were courteous enough to give it a second life with a re-mastering and brand new artwork for all to enjoy. For those who haven’t heard the original but have come into the Revocation fold, you can expect the same level of stunningly tight technical thrash that the band has become renown for. It’s actually a bit crazy to think that this was the band’s debut. It sits nicely at the same level as the rest of their crushing discography. Some highlights include the more mid-tempo thumping of “Age of Iniquity,” the opening riff-fest of “Unattained,” and the effective blend of melody and assault on “Exhumed Identity.” But that’s not all, in addition to the re-master, the band’s 2006 EP, Summon the Spawn, has also been included for your listening pleasure. The production is a bit raw, but the thrash fireworks more than make up for it. It’s particularly cool to hear these cuts of the tracks (all of which are featured on Empire of the Obscene) in a more raw and primal form.

Plenty of bang for your buck with this reissue of Empire of the Obscene, particularly if you hadn’t been privy to the album before now. An addictive piece of thrash if there was one, with plenty of melodies and intricate riffs to keep you coming back for additional helpings.