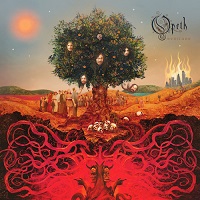 Mikael Akerfeldt lives in the 70’s…everyone who follows Opeth knows that. Aside from the man’s very-public affinity for it, Opeth’s flirtations with 70’s prog has been an accessory to most of their studio albums, but Heritagemarks the first real “departure” from the norm (and no, 2003’s acousticDamnation doesn’t count). Without the notorious death-march the band spectacularly put on from album-to-album, Heritage is an awfully curious listen. Which is probably what Akerfeldt and co. want people to think anyway.

Not a trace of mass distortion, rumbling double-bass, or Akerfeldt’s patented death growl to be found. Instead, Heritage meanders about with a loose, almost jazzy prog vibe that for those who aren’t initiated, could be troublesome. However, the ideas presented on lead-off track “The Devil’s Orchard” run congruent the band’s elongated song

structure template, meaning, there are numerous twists and turns to keep the song moving.

As the album unwinds, it becomes more reserved, save for the rambling “Slither,” which might be the only song of the lot that could be deemed as metal, but even saying that is a reach. Rather, Opeth prefers the open/Pink Floyd-like confines of tracks like the haunting “Häxprocess” or Bohemian “Famine,” which is complete with an opening flute solo. The bass/drum intensive “The Lines In My Head” might be the best track of the bunch, with the stellar rhythm section of Martin Mendez and Martin Axenrot in full lock-step with each other.

Apparently the type of album Akerfeldt had to get out of his system, Heritagedoesn’t quite have the songs of its predecessors. And no, that’s not because of the lack of the key, classic Opeth ingredients, it’s a tad too self-indulgent, especially with the constant 70’s rock references. Then again, it’s not like any of this was a secret. Opeth has finally made the album they wanted to make. At this point in their career, they’re allowed to do such things.