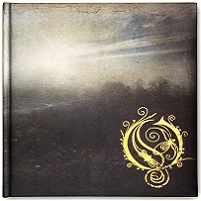 Well overdue for a book considering Mikael Akerfeldt’s gift of gab and Opeth’s fascinating history, the Swedes have pulled together quite the impressive package with the aptly-titled Book of Opeth. Told from the perspective of the band (Akerfeldt leading the way, of course), and stocked with many never-before-seen photos and a nature-y layout, Book of Opeth effectively tells the story of the band’s storied career without getting hung up on minutia, pointless anecdotes, or any other meandering self-congratulatory tales that often come with autobiographies.

The band’s story in itself is worth the price of admission. Akerfeldt is not even the band’s founding member—that distinction belongs to David Isberg, who would eventually bolt in 1992, leaving Akerfeldt and co-guitarist Peter Lindgren to their own devices. The struggles Opeth would encounter in the Stockholm scene are not terribly surprising. They were true oddballs, swimming against the current of straight Swedish DM bands ala Dismember and Entombed. Once Candlelight Records owner Lee Barrett caught a snippet of one of the band’s rehearsal room demos, they were signed instantly. Reading Akerfeldt and Lindgren’s description of this point in time is particularly telling, as their excitement over signing to Candlelight was soon dashed after Orchid, Morningrise, and My Arms…Your Hearse were never promoted properly.

There’s a small, but harmless amount of sniping about members who have come and gone (reading the demise of drummer Martin Lopez was difficult), but the stick-to-itiveness of Akerfeldt eventually paid off by the time Blackwater Park hit. After that, their career was never the same, having ascended to the top of the progressive metal heap, only for them to suddenly embrace the ‘70s rock sound in full come 2011’s Heritage.

Honest, forthcoming, and at times, comedic, Book of Opeth properly captures the essence of one of metal’s most intriguing outfits. Us lads over here in North America may have to import the sucker from the UK, but, it’s probably worth it.