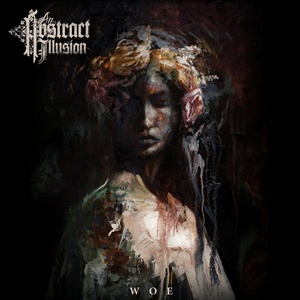 When one has consumed a lot of music in their lifetime, it can get more and more difficult to find something that is truly revolutionary. A piece of music that energizes, inspires, and just plain drops the old jaw. Something truly special that (hopefully) launches a much deserving band into the stratosphere.

With that said, we have An Abstract Illusion – a Swedish progressive death metal trio who have taken the norm and lit it ablaze. There’s no “illusion” here. Instead, we have the sonic equivalent to discovering plutonium – by accident! That’s my Seinfeld reference for the day – you’re welcome. While the aforementioned is a show about nothing, An Abstract Illusion’s second album Woe is definitely something gloriously substantial.

As briefly alluded to earlier, An Abstract Illusion is a progressive death metal act, but they’re so much more than that. They’ve managed to conjure up a sound that reminds one of classic Opeth with some of the more somber patches, Ne Obliviscaris with the sheer level of creativity, and many unique elements resulting in a recipe all of their own. It’s immediately obvious with the opener, “The Behemoth That Lies Asleep.” Beginning with a haunting piano driven piece, while expanding into a mesmerizing guitar lead that is topped off with lightly vocoder-laden vocals that set the tone. The journey begins.

Quickly we’re transitioned to some gravely and potent growls complimented by a huge guitar attack on “Slaves.” Here lies a mix of the melodic end of black metal, layered with memorable riffs, tantalizing clean guitar passages, clean singing that soars, and a variety of tempo changes that flow together naturally. That’s a lot to unpack in one song a hair over 7 minutes long, however, it’s so painstakingly crafted where nothing is out of sorts. “Tear Down This Holy Mountain” is next, seamlessly transitioning from its predecessor. A thick symphonic atmosphere gracefully builds tension; guitars fading into the mix with a short spoken-word piece, then blisteringly picks up with guitar melodies and bellows that drive the track further.

“Prosperity” is filled with warm singing that has the soulfulness of Daniel Cavanagh (all the love and support to you, Daniel) of Anathema fame and pulsating drum setting the pace, all while finishing with a melancholic piano piece that continues into “Blomsterkrans.” Mournful violins (Lukas Backeström), cellos (Carolina Teruel), and a chilling Swedish spoken word segment define this track; an interlude of sorts that is equal parts hope and sorrow. In contrast, “In the Heavens Above, You Will Become a Monster” begins with a heavy guitar attack laden with snarling screams. This track is the album’s magnum opus – clocking in at 14:28 – with the first half being some of the fastest and heaviest moments on offer. The second half is filled with timely synth segments, quickly moving into a haunting guitar lead, along with a memorable guest vocal appearance by Lovisa Strindell (need to hear more from her in the future). Wrapping up proceedings is “This Torment Has No End, Only New Beginnings.” This last track is a proverbial exclamation point of crushing segments moving into a soothing acoustic guitar / clean vocal passage, with an outburst of chaotic riffage to close things out.

Produced by the band’s guitarist / bassist Karl Westerlund, every intricate piece sounds incredible. Mixed / mastered by Robin Leijon, the many layers of this masterpiece are exactly where they need to be to make the many intricacies of Woe shine, while nothing dominating over anything else. The result is an overall sound that is grandiose while nailing every morsel of detail.

An Abstract Illusion have a breakout album on their hands. Woe is an album that is a sum of all of its parts, with every song bringing something different to the table individually, but when combined create a tapestry of sound, emotion, and beauty that doesn’t come around often. Savor and enjoy – An Abstract Illusion is going places, and this writer cannot wait to hear what these incredibly talented artists do next.