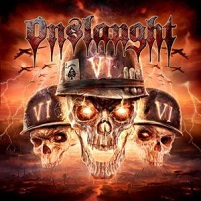 This UK thrash act has been through a three-phase career to many fans. Their first two albums Power From Hell and The Force set the British thrash template, while album #3  In Search Of Sanity featured ex-Grim Reaper vocalist Steve Grimmett and a move to more commercial pastures. Currently going through phase three following their reformation in 2004, VI hits the streets at a prime time in the release schedule, and I do believe any thrash fan in a right (or insane) frame of mind will find plenty to slam and scream about with these nine tracks.

Following “A New World Order” and it’s 36-second exotic instrumental set up, the first riff of “Chaos Is King” rips your head off like prime Slayer circa Reign in Blood, then the main riff amazes again with swift picking a la Sepultura-meets-Paradox as vocalist Sy Keller spits the words out with caustic aggression. “Fuel for My Fire” is a dual guitarists dream, loads of fiery breaks and rhythms from Nige Rockett and Andy Rosser-Davies with the right mid-tempo gallop to match Michael Hourihan’s pummeling double kick work, as Schmier would be proud of the echo chorus parts.

Other highlights include the Middle Eastern vocal strains and chord themes for “Children of the Sand” (very Grip Inc. like) and militant headbanger “Dead Man Walking” which should send many a pit into bedlam. Thirty-nine minutes later, drained, bruised, and battered, you will likely press play again as this reminds me of what classic thrash is supposed to be about: fierce, mean, aggressive, tight and with the right spots of melody to keep you coming back for more. Onslaught move right back to the top of the thrash ranks with this one in the UK (sorry Evile), and VI could be a strong contender for thrash album of 2013.