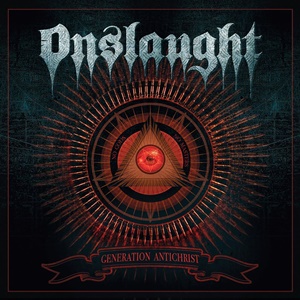 One of the UK thrash initiators from the 1980’s, Onslaught returned in 2004 and have reestablished their hard-hitting style, possibly reaching a peak with their slightly technical/progressive 2013 album VI. Touring for years behind that – then celebrating the 30th anniversary of The Force with more world tours – it’s now time to release the seventh studio record Generation Antichrist. Featuring three new members since the last effort – the sudden inclusion of vocalist David Garnett in the eleventh hour following Sy Keeler’s decision to step away from the business gives these set of tracks a new urgency, allowing veterans like guitarist Nige Rockett and bassist Jeff Williams a chance to evaluate and assess where they believe Onslaught slots in best for the current times.

Those fearful that David’s efforts will derail the Onslaught express train need check out his raspy, venomous attack to “Strike Hard Strike Fast” and let out a sigh of relief. The man has the right delivery, aggression, and versatility to appeal to those who loved Sy as well as need a more modern punch (think Robb Flynn or Phil Anselmo in his 90’s prime) to get you prime and ready for head flailing, sweat dripping excitement. The mid-tempo rhythm guitar juggernaut that is “Bow Down to the Clowns” should make this a prominent Onslaught track from this point forward, the gang-infused chorus and riveting instrumental twists rivalling the best Exodus and Testament tracks as of late. Many songs tackle Nige’s always tumultuous relationship with religion, the title track and controversial first single “Religiousuicide” providing plenty of food for thoughts to chew on. The tones and nature to these nine tracks feels like a full-tilt reminder when Onslaught were vicious first, and hook-minded second – energetic efforts that contain proper focus, killer drumming from James Perry (check out his work on “Addicted to the Smell of Death”) and channeling the best ferocious aspects to the genre in a tidy, under 40 minute consumption model.

While the young guard do their best to take thrash to that next level, don’t sleep on the pioneers like Onslaught. Generation Antichrist achieves its goal of shooting first musically and asking any questions later – and that’s what the best thrash records should be about in the end.