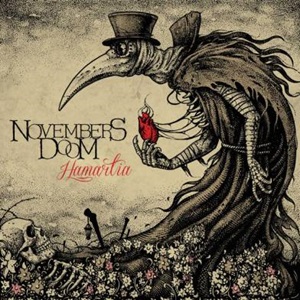 Achieving a rare feat in the tenth studio album milestone with Hamratia, Novembers Doom is one of those dark metal bands that may not necessarily be the most popular act in their craft, but appear to be well respected and appreciated by their following and fellow musicians. Probably due to the strength of their catalog – of which Of Sculptured Ivy and Stone Flowers, The Pale Haunt Departure, and their last album from 2014 Bled White receive praise and consistent airing from this journalist. Carving out moodiness in their choice of brooding emotional connectivity on all levels, Novembers Doom keep surprising listeners for the doom/death riffing, duality of clean and growled vocals, and touching lyrical content that speaks to the diverse metal community at large.

The difference makers for Novembers Doom come in multiple spots. Drummer Garry Naples for instance will think nothing of rolling out interesting double bass patterns and active fills during a somber closing on “Ever After”, and sit into a comfortable death groove for the rapturous “Apostasy”. Paul Kuhr has that rare magnetic push and pull combination when bellowing intelligible growls one measure, only to change into this ethereal, slower paced lower register that takes recalls the likes of Tiamat circa Wildhoney and Type O Negative (pick any album). Check out his efforts in “Miasma” (one of three to feature his daughter Rhiannon as a semi-duet) and the trippy, doom swinging “Plague Bird” to understand the man’s rare gifts to channel visions into vivid pictures that touch the soul. Guitarists Larry Roberts and Vito Marchese serve up numerous melodic death, doom, and cleaner, alternative phrasings – the type of respectful, tasteful progressions that make the listener sit up and take notice without being too flashy. Less can indeed be more in the opening echo guitar melody imposed for “Devils Light”, the careful clean buildups within “Ghost”, and the hugeness and forceful riff energy that gives “Zephyr” an out of body lift.

Mastermind Dan Swanö not only mixes and masters Hamartia, but provides a background vocal assist on the 9:23 “Borderline” ending track. Here we have an epic that combines the beauty and atmosphere of everything from recent Katatonia to Anathema, guitars swaying in and out of a winding breeze, the stillness offering reprieve before the arrangement twists again subtly, bravely, the poetic words chiming as ‘the new day begins… guided by the morning light, illuminated through the distant dark.’ A logical continuation of the themes and terrain of Bled White – as well as the first album in the band’s existence to have the same lineup – this is a mighty doom/death record that should receive accolades and airings for years and decades onward.