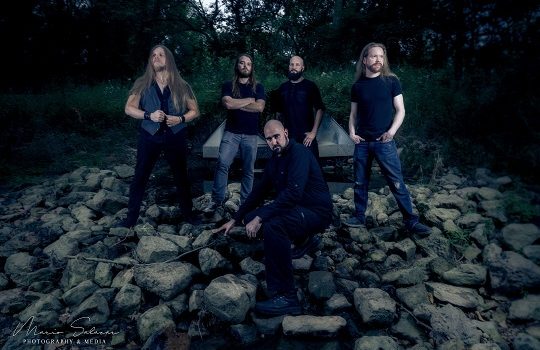 Currently the third-longest tenured member in venerable Chicago doom outfit Novembers Doom, guitarist Vito Marchese evidently has an entirely separate creative itch to scratch, hence, his excellent instrumental outfit, The Kahless Clone. While Novembers Doom presents an indomitable, lumbering front, touched up by spacious doses of melody, The Kahless Clone is a bit more poignant and lush. Being that no vocals are present (read below for Marchese’s explanation), the songs on both of the band’s albums (2015’s An Endless Loop and this year’s Our Never-ending Loneliness) offer up wistful bouts of instrumental metal, songs that carry their own identifiable weight and momentum. Wanting to learn more, we sent off some Q’s to Marchese. Here’s how he responded…

Dead Rhetoric: Does your work in Novembers Doom ever rub off on The Kahless Clone? Or, are the two totally separate?

Vito Marchese: It’s fairly easy for me to separate the two writing styles for these bands. The song ideas I have in mind for Kahless aren’t things that would really work that well in Novembers Doom. With Kahless, the focus of the songs isn’t about laying a foundation down for the vocals to do their thing. That tends to free up space for what I can do with the song structures/ideas. I also like mixing in electronic sounds and programmed drums into the songs, which is not really something I think fits with Novembers Doom.

Dead Rhetoric: Has The Kahless Clone used any ideas you initially had for Novembers Doom?

Marchese: No, that hasn’t happened. Although, I did bring a song idea I had initially written for Kahless into a Novembers Doom writing session for our Bled White album. That idea ended up turning into our song “Just Breathe.” I felt that my original idea would turn out better if we shaped it into something Novembers Doom could use.

Dead Rhetoric: ND remains pretty active, so, when do you find time to do The Kahless Clone?

Marchese: Time does get limited since I have a lot of stuff going on, but I just make the time whenever I can. I purposefully keep my life as simple as I can to allow myself the ability to work on music as much as possible. Novembers Doom has stuff planned out months and months in advance, so scheduling things is pretty simple enough.

Dead Rhetoric: Recently, Larry Roberts from ND joined the fold. What made him come aboard?

Marchese: Andy Bunk, who performed on the first EP, wasn’t available for some shows we had planned at the time, so I needed to find a replacement. Larry was an obvious choice since I’ve played with him for so long and I knew he would be a good fit. We played a few shows together and Larry ended up writing bass lines for the newer song ideas we were putting into our set. When it came time to record the second EP, it was clear that Larry would be the guy.

Dead Rhetoric Writing convincing instrumental music is not easy, but you’ve managed to do it on both albums. What kind of approach do you take when writing the songs?

Marchese: Thank you! Since there are no lyrics or vocals to tell you how to feel or think, I try to come up with song titles that put you into a certain mood or headspace before you even hear a note of the song. Trying to match the music with the song titles or vice versa can be the hard part, ha-ha. I compile lists of song title ideas and record snippets of riff ideas or song structures and then sift through all of them to compile a rough draft of what the final version will be. After that, I just hope for the best!

Dead Rhetoric: Our Never-Ending Loneliness sounds a little more progressive and refined than its predecessor. What other elements do you plan on throwing into the mix?

Marchese: We’ll have to see how the writing comes out for the next release, but I’m not planning on adding any elements that are that far removed from what has already been found on these two EPs. I definitely need to refine things further and keep growing as a songwriter/musician, so the next one won’t be a rehash of anything. Doing a concept based EP/album has entered my mind a few times now, so that is always a possibility.

Dead Rhetoric: Thus far, you’ve released two EPs. Was that to maximize the impact of your songs? Or, because of the difficult nature of writing a full-length instrumental metal album?

Marchese: Honestly, the main reasons I’ve done two EPs instead of a full length are for one, these were both released independently and self-financed by myself. That, unfortunately, limits how much music I can record at one time. The other reason is I’ve noticed how people’s attention spans have drastically decreased. I think having a four or five song EP is something most people can digest better than a full hour-long length release, especially when you are a brand new band. I don’t think people have the time or patience to try and listen to that much material when they don’t know anything about you.

Dead Rhetoric: Other instrumental bands have taken the dive and added guest vocals. Do you ever see that happening for The Kahless Clone?

Marchese: No, I don’t see us ever adding vocals. I started The Kahless Clone knowing full well that it would be a strictly instrumental band. I’m already in a band that has vocals and every band or project I’ve been involved with has always been a vocal-based band. I wanted to do something different.

Dead Rhetoric: What will your live show approach be for the EP?

Marchese: We’re going to be playing live as much as possible in support of the new EP. That includes local shows as well as regional touring. We are constantly thinking about and working on how to make our live show better. More money will definitely aid us in making that possible, ha-ha.

Dead Rhetoric: Finally, what’s on your agenda in the final months of 2017?

Marchese: We just got done playing our EP release show in Chicago the other night. The rest of 2017 is going to actually be focused on Novembers Doom. We are going over to Europe at the end of November for a short tour. Once that is over, then The Kahless Clone will be back to playing shows. We have shows already booked in early 2018, and more on the way.