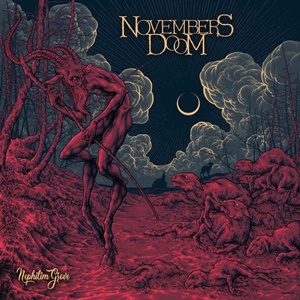 Fresh onto newer label pastures with Germany’s Prophecy Productions following a long-run from the mid-2000’s with The End Records, Novembers Doom at this point of their thirty-year career want to continue marching at their own pace, content to create new works of art based on their strengths and abilities to explore what appease their needs in the death/doom realms. Nephilim Grove as the quintet’s eleventh studio album embraces a deep dive into stellar performances and openness to refine what these musicians love about the metal genre – the push and pull of conventional riffs and melodies against their individual outside non-metal influences that color these tracks as unmistakably unique, passionate, and unquestionably fulfilling.

The abilities from musician to musician throughout showcase a vibrancy rarely heard in most of today’s recordings – “Petrichor” capturing attention from the get-go through the thunderous fills, triplet hits, and double kick maneuvers of drummer Garry Naples against the seafaring rhythms out of guitarists Larry Roberts and Vito Marchese. The subsequent stomping, relentless pummeling nature of brutality takes “The Witness Marks” into death/groove glory, Paul Kuhr switching his noted deep growls against the clean, gothic melody presence that conveys all aspects of hurt, anger, sorrow, and despair as he bellows about ‘an aching black heart’. Sparse, simpler openings allow arrangements to grow roots and spread their wings – “What We Become” a 6:31 affair featuring swirling fills, layered ethereal vocal harmonies, and a tranquil drop in atmosphere that shifts into a brilliant, emotive lead break that is rather uplifting against the heavy doom riffs. The band even reach into the AOR and progressive metal archives at times for a classic Queensrÿche main hook circa The Warning for “Adagio”, while locking into the heavy, low-tuned mechanics for “Still Warmth” – a second half highlight where the churning guitars and blitzkrieg bass/drum sequences shatter walls of pain to remind listeners of the much missed Nevermore in spots.

The extra ‘matte variant’ versions of “What We Become” and “The Clearing Blind” that are stripped down to a bare piano/guitar/vocal essence proves Novembers Doom are premiere songwriters, willing to take chances for originality and reinterpretation that could gain them fringe benefits for extended audience interest. Add in the personal subject matter that Paul channels in proper respectful ways through his lyrics and you have the makings of another album which opens itself up to intense listening sessions where you can get something new out of it on the first, tenth, and hundredth exposure. Heavier while more dramatic in spots than the previous Hamartia, Nephilim Grove could be the best Novembers Doom record to end the 2010’s – no small feat considering their high-quality output this decade and beyond.