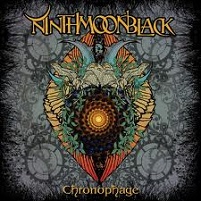 The initial listen of a new piece of music can have a profound impact on how it affects the listener from that point forward. Something is captured in that series of moments and simply lingers with the sound, memories resonating out from it. For Ninth Moon Black and Chronophage it was a late night-drive across state for a family visit that happened to be captured, to that end it’s difficult to imagine a more apt soundtrack for lazily gliding along the winding and passenger torturing length of 421. Hazy and laden with atmosphere and melody,Chronophage is a delight.

Admittedly my first initial thoughts were complimented by a loud groan – more instrumental post-metal, huzzah! Knowing that was a poor attitude to have, it slid away and in preparing for my drive, I took it along. With the quiet and pulsating ringing of opener “Renascentia” it was immediate the album had been prematurely judged. Guilt over this only intensified as the album’s lush trance-inducing sections and surging organ-laced crescendos washed over the car with the night air. Something of a marriage in tone between Do Make Say Think circa 2002 and early Pelican, while not completely amiss in modern touches there’s something temporally ajar in the music on Chronophage (and it’s all the better for it). The tides and incessant trends of the last few years in large part absent, this beast a beast all its own.

Highlights in particular being “Mors Carnis” and closer “Numeratio” are where the various elements that the band strives for (bits of psychedelia, progressive touches, and post-metal) comingle together best, undulating waves of melody and cautious fury. In this world of incessant also-rans and hacks (almost everything in post-metal a few years ago), it’s pleasant to find something largely on accident that can soak up a night and completely sweep the mind clean. Chronophage has been put through many listens since that initial drive but every time the memories etched into its sonic nuances resonate vividly. A work of poise and joy, Chronophage is among the biggest surprises of my year.